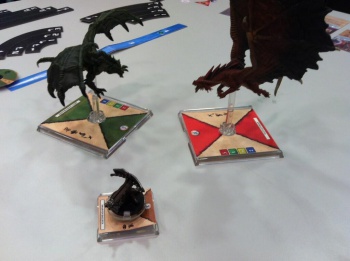 WizKids will offer its Dungeons & Dragons-themed Attack Wing and an Avengers Vs. X-Men dice game within the year.

Heard of WizKids Games? Well, if you’ve walked into a comic book or tabletop hobby shop lately, you’ve definitely seen its work. The company is well-known for games like HeroClix and Star Trek: Attack Wing, and just last month teased details of an Attack Wing title in the Dungeons & Dragons franchise. At the 2014 GAMA Trade Show, WizKids not only unveiled some of these Attack Wing designs, but discussed its brand-new Dice Masters game, which debuts next month with Marvel Comics’ Avengers Vs. X-Men.

But first, direct your attention to the new Attack Wing models, which you can see heavily distance themselves from any science fiction origins. According to a WizKids presentation, Attack Wing Dungeons & Dragons features campaigns and character alignments, along with dragon battles, ground troops, spells, and more. This should let Attack Wing to ease new players into common Dungeons and Dragons elements, unless they’d prefer to fill simply fill shelves with dragon miniatures. Both approaches are valid.

Dice Masters, on the other hand, is a new game designed by Mike Elliott and Eric Lang launching next month. Starting with an Avengers Vs. X-Men line, each session takes about 20 minutes to play as you recruit heroes, roll Sidekick dice, and activate skills and abilities. An AvX play mat will be made available, while Yu-Gi-Oh and DC’s Injustice games are planned as future releases. But if you’re wallet’s a little tight, the best part is price: A starter set will only cost you $15, while boosters of 2 dice and card sets are worth a dollar each.

We’ll keep you updated on new information for each game as it becomes available.

Hearthstone Aims for Simplicity in Both Art and Play