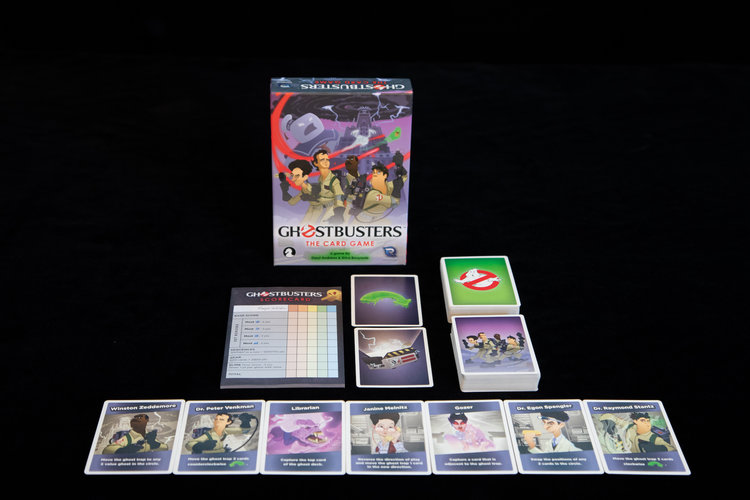 Both Mattel and Cryptozoic Entertainment have released Ghostbusters games that have players embrace the titular group’s camaraderie and team up to fight ghosts together. That design choice makes a lot of sense. But I also can imagine the events that could lead up to Renegade Game Studios’ Ghostbusters: The Card Game, a lull in paranormal activity leaving the egomaniac scholars of the supernatural bored. With no external threat to focus on they turn on each other, bragging about their ghost capturing prowess until deciding to settle the matter with a test of skill and flipping the switch on their ghost containment unit, setting free all their former foes for a grand hunt.

At least that’s the plot I imagine. There’s no clear preamble for this lightweight game meant to be played by two to five people in 20 to 30 minutes. You’re not even taking on the role of a specific character, though all the iconic ones make an appearance in the game’s cards. Each round, 12 cards representing ghosts and useful equipment are arranged in the form of a clock and players take turns playing up to two action cards from their hands. Most of the actions let you move the ghost trap around the circle and at the end of your turn, your trap will capture whatever it’s next to. Ideally you want to reel in something big like the Stay Puff Marshmallow Man, who is worth five points at the end of the game. When all the ghosts in the middle are captured a new set is dealt out and the process starts again until three rounds have passed. Then you add up scores and determine the winner.

There are a few other wrinkles, slapping on common card game mechanics with only some nods to flavor. Each ghost has a numerical value from one to seven, which is separate from their point value, and arranging them in a straight will earn you points based on how many you can get in a row. It’s a consolation prize to make capturing smaller ghosts worthwhile since the 10 points you can make for a full straight is so significant that if any player pulls it off you also need it to still be in the running for victory. Some ghosts also have little symbols from the psychic test that Peter Venkman performs at the beginning of the first film. Collecting the most of each type of symbol also give you bonus points. On the other hand some ghosts have slime and if you have the most slimy ghosts at the end of the game you lose points. It’s hard to impress your friends if you’re covered in goo. Amusingly if you can capture Slimer, slimy ghosts add to your score instead.

The real problem is that success is almost entirely based on luck. It’s nearly impossible to plan your moves ahead of time as by the time your turn comes you have no idea what ghosts will be available, where the ghost trap will be, or even what direction it will be moving in as there are cards that can dramatically change all of those things. Some ghosts provide you with powerful actions like Mooglie, who can be used once per round to capture a ghost off the top of the deck. I’m not surprised that the player who nabbed him round one wound up winning the whole game. Some action cards have similar effects and players are just constantly fishing for things that will let them do something more interesting than just move the ghost trap one or two spaces.

Still, the simple rules made Ghostbusters: The Card Game an ideal game to play at the beginning of a game day. When people kept arriving every few minutes, we could just deal them in and quickly catch them up with the rules. The familiar characters and cute art offered plenty of room for reminiscing and joking about things like Vigo the Carpathian only being worth one point. Nobody likes that baby possessing weirdo. The game isn’t going to be a classic but it got me in the mood for a day of more sophisticated competition and also left me wanting to rewatch Ghostbusters again.