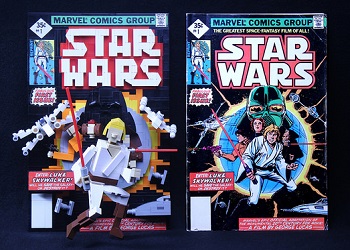 A showcase at this weekend’s DesignerCon will feature LEGO builds based on famous comic covers.

LEGO fans are nothing if not an industrious collection of people. Whether it’s epic Lord of the Rings builds or gigantic brick starships, it’s not hard to find examples of enormous creations that, plain and simple, blow the mind. That being the case, a LEGO creation doesn’t necessarily need to be huge to be impressive, something well demonstrated by a recent string of comic book-themed LEGO builds being put together for an art display for this weekend’s DesignerCon 2014 at the Pasadena Convention Center in California.

The display in question has been dubbed Comic Bricks! and is being hosted by the fine folks at BrickStuds. The idea behind Comic Bricks! is simple: pick a comic book cover and recreate it to the best of your abilities with LEGO bricks. It sounds like a simple enough task, but becomes less so when you consider the complicated nature of many comic covers both from across the medium’s long history. That being the case, a Flickr page created for the event has already turned out an impressive array of recreations based on classic covers from series including Batman, Spider-Man, Captain America, The Incredible Hulk, Akira, Star Wars and more.

Just looking at the currently available samples I have to say that I’m personally most impressed by the Akira build. While there were several strong pieces overall, it just a great job in my opinion of using the three dimensions allowed to a LEGO project to more accurately recreate the cover in question. As for the Comic Brick! display itself, more than 30 models are expected to make appearances. Suffice it to say we’ll be eager to see what else emerges from the idea.

Source: From Bricks to Bothans