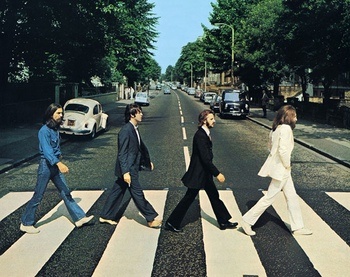 The Beatles: Rock Band might have some appeal for Beatles fans who are wary of picking up a videogame: the game will feature never-before-heard material from The Fab Four.

The Beatles: Rock Band will undoubtedly introduce the music of like, the greatest band ever, to a whole legion of youngsters who would rather listen to Fall Out Boy than The Fab Four, but it might have plenty of draw for the hardcore Beatlemaniacs who know the band’s catalog and history through and through already, too, as the game will feature heretofore unreleased material from the band.

Though he wasn’t at liberty to divulge any details, Dhani Harrison (that’s the son of George Harrison) said that the game will include “stuff that has never been heard, never been released.” Whether that means songs, song fragments, or an outtake from a recording session with Paul McCartney coughing into the mic and talking about his favorite food, we don’t know. But since it’s The Beatles, it could be a big deal.

And unlike Guitar Hero: Aerosmith or something, Harrison claims that The Beatles: Rock Band will be “the first one that is going to be totally, historically accurate.”

If you couldn’t tell, Harrison is pretty psyched about the game, describing himself as a kind of driving force behind the entire project. “My job description is … being enthusiastic,” he remarked. “We’ve been working on it for the past two years… It’s been a real headache, but it’s been the most enjoyable work I’ve done in my life.”