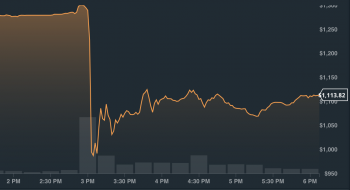 If the proposal had been approved, the public would have been able to invest in bitcoin simply by purchasing shares in the ETF.

Bitcoin has taken a very dramatic hit today, dropping as much as 22% in value. The reason behind this sudden drop was regulators for the SEC rejecting what was known as the Winkelevoss ETF proposal, which would have allowed bitcoin investments to be traded on the stock exchange.

Essentially, wthe public would have been able to invest in bitcoin simply by purchasing shares in the ETF, which would trade on a U.S-based stock exchange.

The assumption was that an approved ETF would open the floodgates to both Wall Street and regular investors who want a stake in the digital currency but didn’t feel comfortable purchasing it on their own. This influx of new investors would then drive up the price of bitcoin.

The reason SEC gave for the rejection of bitcoin is the very reason it has become so popular: it is an extremely unregulated currency, and doesn’t comply with SEC standards.

Tyler Winklevoss, who authored the proposal, says that he hasn’t given up hope yet. “We remain optimistic and committed to bringing COIN [the ETF’s proposed ticker] to market, and look forward to continuing to work with the SEC staff,” he said of the ruling.