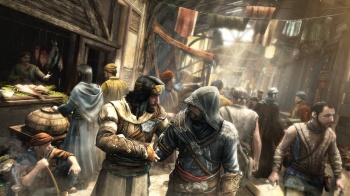 Ubisoft Montreal’s executive director of production service, Yves Jacquier, says that the key to making games better is to improve the artificial intelligence powering them, not making the visuals sharper or more intricate. Ubisoft is investing a million dollars over the next five year into new ways of looking at game production, with work on AI being at the forefront.

“AI has always been the real battleground,” he said. “The challenge is that, if you see an AI coming, you’ve failed. And that’s a problem we have to overcome as we create the impression of flawless, seamless worlds.” Jacquier thought that the Wii – which was rather underpowered, compared to its rivals – was the first step ousting graphics as the most important thing in videogames. While pretty visuals were important, especially when it came to marketing a game, he didn’t think graphics would be a strong feature in the next console generation.

He was also hopeful that the next console generation would give developers more room to work, as the current generation made it difficult to have good graphics and and good AI. He said that he didn’t see the point in making a game that looked great if it didn’t have decent AI to go with it.

Jacquier is really onto something here; no one is going to say that graphics aren’t important, but a game has to look pretty exceptional for the visuals to get more than a cursory mention. Obviously, there’s always going to be room for improvement, but developers might find that slowing down on visuals and working on the less obvious elements of a videogame gives them more bang for their buck.

Gearbox Co-Founder Calls Wii U a Bridge Between Console Generations