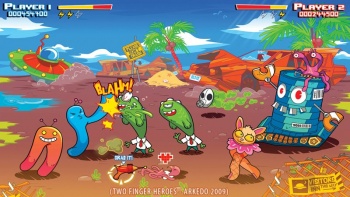 Arkedo Studio came up with a Natal game that was very different from the rest of the pack.

Camille Guermonprez, the CEO of Arkedo Studio, a French developer behind quirky titles such as Nervous Brickdown, Big Bang Mini, and XBLA’s recent 03 Pixel, has released the concept work from an interesting but unfortunately canceled project for the Xbox 360’s Project Natal. The game was dubbed Two-Finger Heroes and would have been a side-scrolling brawler controlled using finger motions and hand puppetry.

To move the game’s characters, players would face their hand downwards and walk with two fingers. Gestures would cause the on-screen character to jump or kick as they took on waves of “really stupid” enemies. The strain on two-finger motions would have been broken up with segments that used hand or folded-arm motions. Two-Finger Heroes‘ “Check” power-up system used specific hand signals, like the Shaka, to either improve a character’s abilities, or harm them if the gesture put in was naughty.

As Guermonprez says, the accompanying screen is “bullshit,” but was mocked up respecting technical limitations and being realistic in the sense of Arkedo’s development tools. Two-Finger Heroes, which was only worked on for 12 days, was canned due to the requirement of “very precise pattern recognition from the Natal system” and localization issues. Finger gestures that could send a person to a death sentence in one area of the world are completely harmless in another, and Arkedo felt it would be a little too much trouble to sort out. I’m saddened, because Two-Finger Heroes is one of the first titles that actually has me excited at what creative people will develop for Natal.

I Have Seen The Future, And it is Annoying