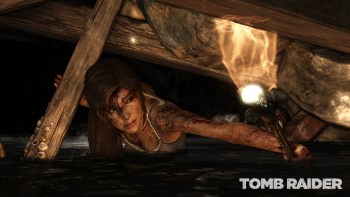 The new Tomb Raider has been pushed back until early 2013.

It’s been over a year since we got our first look at the darker, grittier reboot of the Tomb Raider franchise, which will feature a younger, less experienced and more realistic-looking Lara Croft embarking upon her very first adventure, that somehow doesn’t look quite as fun-filled as some of her later jaunts. And now it looks like it’ll be another year before we actually get to try it.

“When Crystal Dynamics first set out to reboot the Tomb Raider franchise, there were two goals that we were extremely passionate about. The first was to create a modern Tomb Raider game that would surprise and excite gamers. The second was to make this the best game of our careers, something we would be really proud to be a part of. We truly believe that we have something very special on our hands and we can’t wait to share it with you,” Crystal Dynamics chief Darrell Gallagher said in a message posted on the Eidos forums.

“Our priority now is to make sure we fully deliver the very highest quality game. In order to do this, we have decided to move the game’s release date by a few months, from Fall 2012 to the first quarter of 2013,” he continued. “We’re doing things that are completely new to Tomb Raider in this game and the additional development time will allow us to put the finishing touches into the game and polish it to a level that you deserve. We believe this is the right choice and I guarantee it will be worth the wait. The game is looking amazing and we can’t wait to show it to everyone at E3 in a few weeks.”

It’s pretty thin on details and the relatively lengthy delay doesn’t give me a whole lot of confidence in the new release window, but in the long run it’s probably good news for fans of the series. Delays are frustrating, but playing a half-baked game that was obviously rushed to make a launch date is far, far worse.

More information about the state of the game can be found at Eidos’ Tomb Raider FAQ.

Quiz: Which Diablo III Character Are You?

Gonna Go Back In Time