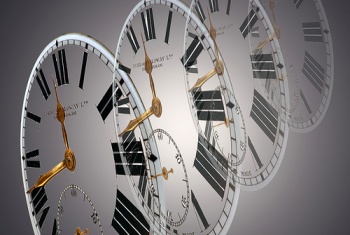 Today, the Bulletin of the Atomic Scientists announced that we are 1 minute farther away from Armageddon.

The Bulletin of Atomic Scientists created the Doomsday Clock 1947 to reflect current public policy and the proliferation of nuclear weapons. The Clock symbolically shows how many minutes are left until midnight, or the complete annihilation of the human race in a nuclear war. The Clock is set somewhat arbitrarily according to current events. It began in 1947, set to 7 minutes until midnight, and has been changed 18 times since its inception. The earliest it was set was 17 minutes, in 1991 after the fall of the Berlin Wall and the signing of the Strategic Arms Reduction Treaty. The Clock was last moved in 2007, from 7 minutes to 5 minutes amid news that North Korean and Iran were testing nuclear weapons. Today, the Bulletin announced that it was moving the clock back 1 minute to 6 minutes until midnight.

“By shifting the hand back from midnight by only one additional minute, we emphasize how much needs to be accomplished, while at the same time recognizing signs of collaboration among the United States, Russia, the European Union, India, China, Brazil, and others on nuclear security and on climate stabilization,” said the statement from the Bulletin of Atomic Scientists. The Bulletin is a publication that was founded in 1945 by former members of the Manhattan Project research team to educate people on the dangers of nuclear weapons. The current Bulletin boasts over a dozen Nobel laureates.

“We are poised to bend the arc of human history,” said Lawrence M. Krauss, co-chair of the Bulletin’s Board of Sponsors and a professor at Arizona State University. “What that means is that there’s great potential for it to move in either direction depending on what happens. That’s hopeful enough to move it but just by a little bit.” Krauss pointed to Barack Obama’s initiatives in opening talks with Russia and Iran to limit their nuclear programs as one of the reasons the Clock has been moved back.

Of course, we all know that the world isn’t going to end because of nuclear weapons. When the robots rise up and infect the human race with the zombie virus, the vampires will put us in blood-harvesting-tubes to conserve their food source and a giant asteroid will hit the moon, creating massive tidal waves which will wash away any evidence that humanity ever existed. I set the clock for that scenario at 27 seconds and counting … 26 … 25 …