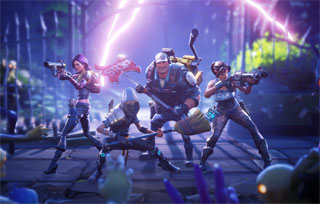 Fortnite players found a disappointing surprise after the 1.4 patch – their Storm Shield bases on three maps had disappeared without warning.

If you’ve been playing the Early Access version of Epic Games’ Fortnite, you might have a bit of an unpleasant surprise waiting for you when you log in again. If you’ve built a Storm Shield base on the Plankerton, Canny Valley, or Twine maps, your base will be gone. The change is bad enough, but the fact that it came without any warning just made it worse.

The change first came to light in this Reddit thread, and then Epic announced that it had screwed up its patch notes for 1.4. Zack Phelps of Epic wrote in a post on the game’s official forums,

“Ok first we messed up in missing a HUGE part of our patch notes. I apologize. We understand how much time you have invested in building your Storm Shield base, it’s your home, your defense, your vision, we feel that way too. We will be dedicated in providing detailed at patch notes going forward.

In our haste to get this patch out we missed clarifying tweaks to the Plankerton, Canny Valley and Twine Peaks Storm Shield maps. We decided to make change to those maps to improve game balance at upper difficulties. Map changes require us to reset any base you have built. Building materials and traps have been refunded into your Storm Shield Storage, the storage overflows in cases like these so you have every piece of stone, every trap laid ready to be reused. We have to do this to avoid issues with built bases conflicting with the map changes. We know that the time it took to create your base can’t be replaced, we hope that opportunity to rebuild with all your resources and past experience will allow you to make an even better base.

As we move through Early Access we will be modifying the game and making changes to improve the experience, at times this will mean changes that require refunds to core systems like the skill tree, research tree, and storm shields. We are never going to reset your overall progression.

Moving forward we’ll make sure to communicate changes BEFORE they happen.

Apologize again for the confusion.”

While the removal of bases, especially for those who have gotten so far in the game, can be a giant hit to your progress, the refund of all the materials you used at least means you can rebuild it. However, it’s still annoying to have this happen without any sort of warning.

The Early Access label does mean that we should expect changes to the game, but hopefully this mistake will at least mean that Epic will do a better job keeping players updated on upcoming changes. Don’t be surprised if changes like this continue until the game’s full release next year.