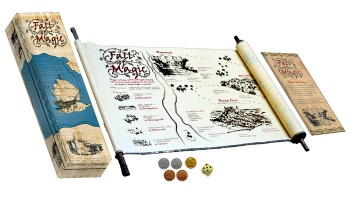 Need an authentic fantasy feel for your next tabletop game? Fall of Magic is a Kickstarter RPG written on a 5′ scroll.

Spend long enough following games, and you’ll find all kinds of quirky mediums and formats out there. But Fall of Magic might have them all beat – it’s a tabletop RPG written entirely on a handmade scroll. Currently making the rounds on Kickstarter, Fall of Magic‘s story unfolds with the scroll itself, unlocking new locations, NPCs, and challenges along the way.

Fall of Magic has a very simple premise: Magic is ending, which means the mysterious Magus will die along with it. To stop that from happening, a group of travelers accompany the Magus to the distant realm of Umbra where magic was born. This journey is charted out over a 6′ x 13″ scroll – with over 5′ of gameplay space – where challenges are resolved using a simple six-sided die.

Outside of that basic framework, the entire story is created by players. On every turn a character moves to a location with either a description or loosely-defined challenge, which the player creates details for. This helps make the game replayable, as the setting itself changes based on which roads are chosen by each player at the table. Prototypes of Fall of Magic have already been tested at conventions over the past two years, but now creator Ross Cowman hopes to complete the game and release it to the public.

Fall of Magic‘s scroll edition will including a canvas scroll, custom metal counters, the die, and more. Digital print-and-play editions will also be available, and there’s even a Magus Edition that includes original artwork and a prototype black-bordered scroll. I think it’s safe to say few gamers will have played anything quite like it – we’ll find out when it launches in Oct. 2015.

Jotun Preview – In Search of Valhalla