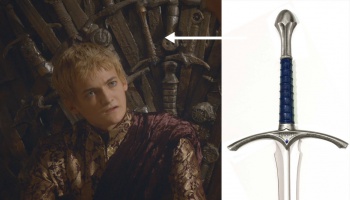 Gandalf’s sword is among the many that make up the Iron Throne.

Quick! What do Game of Thrones and The Lord of the Rings have in common? Well swords, magic, and evidently, one specific magic sword in particular. This Thursday a sharp eyed fan posted a picture on reddit pointing out Gandalf the Grey’s legendary sword from among the many worked into the Iron Throne. The sword Glamdring (aka “Foe-Hammer” or as the goblins among you may know it, “Beater”) was part of a cache of weapons found by Bilbo and crew in The Hobbit, and was carried by the wizard Gandalf throughout the The Lord of the Rings trilogy as well.

In the Game of Thrones storyline, the Iron Throne is forged from the swords of enemies who surrendered by the ruler Aegon the Conqueror, which could be taken as a bad sign for Gandalf (prequel/sequel/crossover anyone?); but a more likely explanation is that the prop-makers for the show used molds or left-over props from whatever sources were ready to hand when they made the throne. This sort of thing is common in the film industry, and is also likely how we get that other hidden Game of Thrones gem, the head of George W. Bush on a spike in the Red Keep (since altered by HBO).