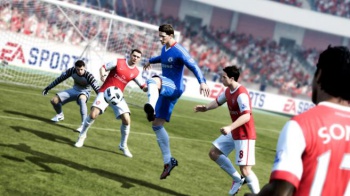 FIFA 12 hit retail shelves recently and in its first week of release, the game sold a massive 3.2 million copies worldwide. That’s a 23 percent increase over the also-massive sales of last year’s FIFA 11.

Oh, but EA’s slate of impressive numbers doesn’t end there.

The iOS iteration of FIFA 12 likewise smashed sales records. 879,000 copies of the game have been sold so far, and the game topped sales charts in 30 worldwide markets.

As a result, EA is reporting that October 1 alone saw nearly 8 million online games of FIFA 12. That makes the date the busiest in EA Sports’ online gaming history.

Regardless of your opinion on soccer — sorry Euro readers, but here in America, “football” is an entirely different thing — or EA Sports, this is rather good news for gaming as a whole. FIFA 12 is a genuinely excellent game, and it’s nice to see quality game design being recognized via the universal language of comically oversized bags of cash.

Being an American however, I am genuinely surprised that the game is actually this huge. It’s no secret that soccer is the world’s favorite game, but I did not expect it would prove more of a draw than dudes chainsawing monsters in half with exaggerated phallic metaphors.