I read this week that Old Man Murray has been removed from Wikipedia. If you’ve never heard of Old Man Murray, then you shouldn’t blame yourself. You should blame the Orwellian system of autocratic lies and brainwashing known as the “public education system” for not taking time to teach you about the website that cured polio so we wouldn’t have to waste time taking care of sick kids and we could spend more time playing videogames. This is the same insidious system that teaches kids that they’re racists if they call African-Americans “black,” and then teaches them about “Black History Month,” just to see which ones snap. The same place where they teach you that Charlton Heston was never president, the US didn’t defeat Canada in the 1969 War for the Moon, Abraham Lincoln didn’t invent the bicycle kick in his cage-match against General Lee to determine the winner of the US Civil War, and that photography was invented for some reason other than to help men remember what women’s nipples look like. A den of lies, basically. This is the main reason I’m having my kids homeschooled by 80’s Bruce Willis movies, after which they will attend the college of Every Movie Where Arnold Schwarzenegger Ever Held a Minigun or a Sword.

Wikipedia claims that Old Man Murray was removed because it’s “not notable.” So I’m going to write some notes about it, thus checkmating the soulless robo-brain that runs Wikipedia.

Old Man Murray was a videogame website that was active until 2002. I don’t know when it started, because, like I said, some jackass removed the Wikipedia page. I discovered it in 1999, and it had been going for a while before that point. Let’s say fifty years.

The point is, Old Man Murray was basically the first really funny site about videogames. Keep in mind that we’re talking about the late 90’s here, when there were only ten websites and seven of them were search engines that weren’t Google because Google didn’t exist yet. I know I might have slipped a little troll history into my first paragraph, but this part is true: A lot of gaming sites were either spin-offs or imitators of print media, and they tended to take a slightly clinical, Consumer Reports approach to reviews. And since graphics were getting better every week, most reviews came off like really creepy love letters to the girl who worked in marketing at NVIDIA. A long time ago I said that reviews are written as consumer advice, but read as entertainment. OMM was the first major site that seemed to understand this and embrace it.

The reason the site resonated with people wasn’t because of its zealous anti-Nazi, anti-robot, anti-Roberta Williams stance, it was because the site more closely reflected what games looked like to people who were subjected to games. A Journalist might have a footnote in their review that “the puzzles in this game are counter-intuitive,” while at OMM they would write a three-page deconstruction of the game that is so savage and so complete that we can be sure Roberta Williams has never read it, because she’s still alive. Their writing resonated with gamers because underneath the profanity, insanity, and alleged sodomy, it more closely reflected how players actually felt about the games they were playing. If the terrible save system in a game drives you to homicide, you don’t knock a point off the review score and call it a day. You excoriate and denounce the ever-loving shit out of that game, until the anger is all burned out and you feel like you can love again. Or at least stop killing people, which is nearly the same thing. 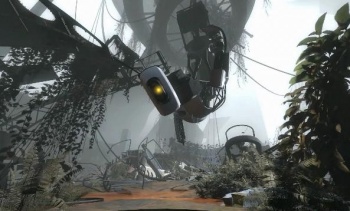 Reading OMM was a revelation for me. I wasn’t the only one who hated these stupid things that game designers kept doing. I wasn’t the only person who thought that videogames had fully explored the possibilities of the crate motif about eight seconds after they began their exploration. There were gamers out there who, like me, have vomited themselves into dehydration at the thought of playing another damnable sewer level. I wasn’t the only victim of a game that managed to get 90% scores from reviewers despite being a crime against all non-sex based forms of entertainment. OMM is what led me to want to write about games, which led me to having this allegedly weekly column, which led to me writing this article, about them. Which should really fry the Wiki robo-brain when it tries to think about it.

Old Man Murray was the work of Erik Wolpaw and Chet Faliszek, who, like the epic US victory in the War for the Moon, you’ve probably never heard of. But here is some more non-troll history for your enjoyment: Chet is one of the people behind Left 4 Dead at Valve. Erik did the writing for Portal. Here, let me say that again, with periods in between, for those of you who go to public school: Erik. Wrote. Portal. It’s like when a reviewer eviscerates a game and some fanboy comes whining with, “Oh yeah? I’d like to see YOU do better!” And then he does. And it turns out to be one of the best games ever.

We all love Yahtzee, right? For the sake of getting the column over with, let’s just say that yes, you do. Well, Old Man Murray was doing what Yahtzee does, back when Yahtzee was 15 years old.

Look, Bow Wow Wow was a one-hit wonder, and their one hit was a re-make of someone else’s incredibly irritating song. Have you ever heard of any musician or performer listing “Bow Wow Wow” as one of their musical influences? No? Maybe that’s because they haven’t been relevant in a generation. So if Bow Wow Wow gets a page on Wikipedia, then I imagine there ought to be room for one of the most original and influential sites surrounding gaming culture, ever, which was run by the creative minds behind a pair of incredibly popular and celebrated games.

And yes, I didn’t do a very good job of parroting their style in this article. Thanks for pointing that out, jackass. This is hard. I mean, if I was good enough to write like that I wouldn’t be wasting time on this article.

I’d be working at Valve.

Release Date for A Dance With Dragons Announced, Plus a New Game of Thrones Trailer