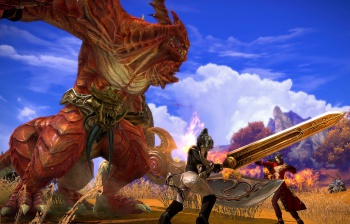 People love free stuff, and for proof of that you need look no further than the current subscription rates for newly free-to-play MMO TERA.

On January 9 we brought you word that TERA, a relatively little-known MMORPG published by Germany’s Gameforge AG, would be switching to a free-to-play subscription model. That change went into effect in February. How’s the game doing under its new subscription model? Words like “phenomenally well” spring to mind.

In an announcement issued this morning in its native Deutsche, Gameforge revealed that the number of players enjoying TERA has more than doubled in the month since the free-to-play scheme went into effect. Granted, this only brings the total playerbase for TERA to a little over a million people, but that’s still an impressive leap no matter how you do the math.

As an immediate result of the game’s newfound popularity, Gameforge was forced to immediately expand TERA’s server capacity with an additional six servers opening up mere days after the free-to-play switch went into effect. According to the publisher, it’s likely that the game will require further expansion in the near future, but Gameforge seems unsure of how quickly and in what numbers it will need to bring new TERA servers online. A 100-plus percent population increase over the course of a single month would have caught any publisher by surprise, but we’ve yet to hear of massive outages, so propers to Gameforge for weathering this happy storm with aplomb while bigger publishers like EA draw fire for their inability to keep SimCity’s servers online.

If all of this has piqued your interest about TERA joining the game is exceedingly easy. Assuming you have a PC that meets the game’s system specs (have a look here to see how your machine stacks up), all you need do is download the game client, sign up for a gratis account and you’re on your way. I spent a bit of time with TERA shortly after it launched, and while I wouldn’t necessarily recommend the game to anyone, I would say it’s an interesting take on the MMORPG genre that should be experienced by anyone who’s played all of the big names in that space. It may not be your cup of tea, and there are many who will be turned off by TERA’s anime-inspired, overtly sexual art style, but it is undeniably different. In a world where publishers seem convinced that the only way to create a viable MMO is to blatantly swipe design cues from World of Warcraft, developer En Masse Enertainment earns a lot of points simply for being willing to try something new.