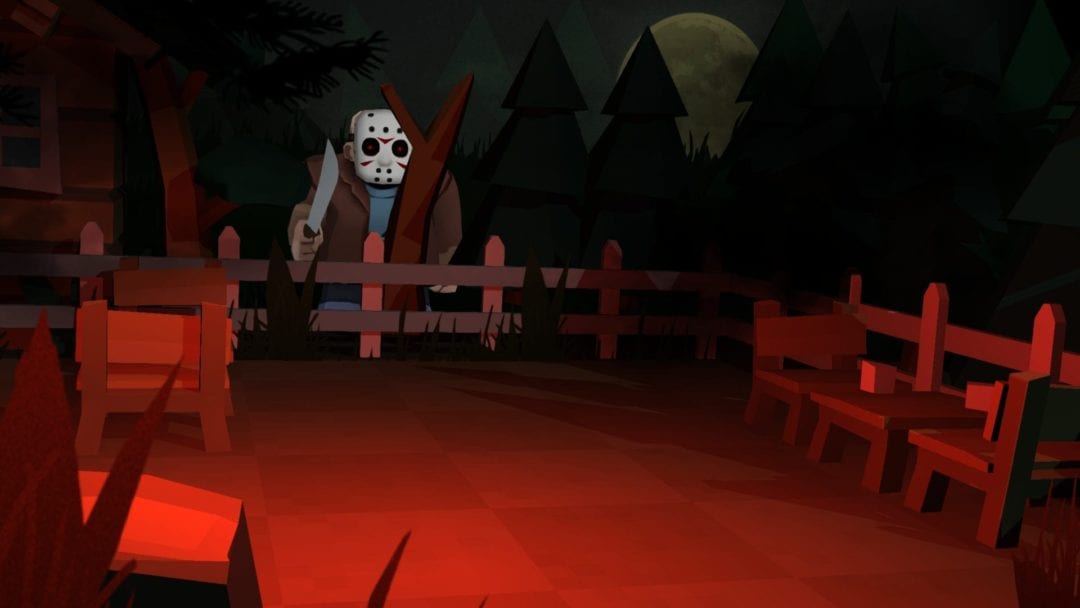 Nintendo Switch has most horror bases covered. There are gruesome thrillers like Outlast, indie spook shows like Inside, and old-fashioned guns-vs-monsters action thanks to some sharp Resident Evil ports. What there is very little of, however, is camp —  a little cheese mixed into the Halloween horror smorgasbord with gore and ugliness exaggerated to the point of being hilarious. Blue Wizard Digital has this Switch niche on lockdown thanks to Slayaway Camp and its new sequel Friday the 13th: Killer Puzzle.

Slayaway Camp was a Friday the 13th game in every way that counts. Released in 2016, it’s a taut little puzzle game redolent of ‘80s VHS horror movies. You steer a tiny little masked slasher around dioramas of summer camps littered with horny, drunk, stoned teenagers. The best joke in the game is baked into the basic action: the slasher, like all of Michael Myers’ relentless descendants in horror, can only move in a straight line. So each stage is a geometric puzzle where you have to slide your grisly wee avatar into the teenagers (a collection of bubble-headed doofs straight out of South Park) to off them in truly grisly ways.

Friday the 13th: Killer Puzzle trades out Blue Wizard’s original slasher for the real deal, hockey mask and all. Jason Voorhees’ keepers at Horror Inc., the production company run in part by Friday the 13th co-creator Sean Cunningham, actually reached out to Blue Wizard to blend their homage with the actual series.

“[Horror Inc.] were happy with how the console game of Friday the 13th was doing and were thinking about a mobile game, but didn’t really know how that would work until they saw Slayaway,” Jason Kapalka, Blue Wizard founder, told me via email. Kapalka is also co-creator of some of the 21st century’s most famous puzzle games like Bejeweled and Peggle. “For our part, I was unsure if Sean would be down with the more comical approach we were proposing. It’s pretty hard to make a one-inch game screen immersive or scary, so we felt we had to go for the more slapstick tribute. But Sean was all aboard for our somewhat zanier approach to Jason, including the more gonzo versions late in the game (time traveling back to caveman days, etc).”

Killer Puzzle is deeply silly. Watching Jason’s stringy hair flop around as he slips around stabbing woozy teens with bloodshot eyes is just the right mixture of sick and funny. The puzzles are fast and satisfying too. By the second or third stage, simple solutions are obscured by clever layouts. Figuring out how to trick some unwitting victim into backing into a fire without getting Jason stuck is on just the right side of not too easy. And the payoff of taking down a Final Boy or Girl — the last takedown carries the title of that vintage horror trope — is just on the right side of not being too disgusting.

“On both Friday the 13th and Slayaway, we did spend a fair amount of time calibrating the exact violence levels,” Kapalka said. “There were some variations that were TOO gross … especially if the victims looked too realistic, or if the murder method was too prolonged or otherwise unsettling. Crucifixions and curb-stompings were right out!

“Likewise we wanted to avoid any firearms. Of the murders in Friday the 13th, probably the one that grosses people out the most is the toilet plunger where Jason stuffs it down the victim’s throat. The original version was actually much nastier … it went on for like 30 seconds and was pretty hard to take, even in cartoon form.”

Cringe-eliciting carnage that is also too absurd to not laugh at is essential to the Friday the 13th series. The original remains a likably spare and freaky thriller but the ten movies that followed all range from dopey (see Jason with the sleeping bag in Friday the 13th Part 7) to unabashedly absurd (Jason wrecks a dude’s boombox!) Capturing that essential feel of the series in an airy puzzle game wasn’t just a matter of balancing brutality and puerility.

“Adding Mrs. Voorhees was what really made it click,” said Kapalka. Jason’s mother’s decapitated head, making its first video game appearance since Friday the 13th on NES, doles out tutorials and commands to Jason while you play. “Jason is a strong visual presence, but obviously doesn’t do a lot of talking. Having his mom’s severed head offering him advice from beyond the grave really helped to give both Jason and the game more character.”