1) Hey, The Escapist is linking to a sale where I can get Age of Empires 3 for a dime! Clicky! Oh, it’s for Games for Windows LIVE. Hm. Last time I had a run-in with GFWL it was less than optimal. But fine. It’s a dime, right?

2) Click to the offer. Add the item to my cart. Great. New continue to checkout. Now the page crashes and I get the Google Chrome Aw Snap! page. Hm. This might be a problem with Chrome and not the website. Maybe. I’ll switch to Firefox.

3) Click on the offer. Add item to cart. And suddenly everything is in French. The link I clicked explicitly contained EN-US, but for whatever reason, adding an item to my cart transported me to Frenchworld. I try to navigate back but it’s now all French, all the time.

4) I start over with a fresh browser window. Same link. This time it doesn’t change languages on me. Add item to cart. Proceed to checkout. Now it asks me for my GFWL login. Okay, enter that and…

5) REJECTED. There are new Terms of Service, and I must agree to them before I can continue to use the service. So it threw away my login and gave me a link to www.xbox.com where I can agree to the new TOS. I don’t want to seem pedantic here, but I’m not using an Xbox. This is Games for Windows, isn’t it?

6) Jump over to the Xbox site. Log in again. Agree to the TOS. Now back to the GFWL site. Now I try again to log in. Login accepted. But it keeps putting the notice in my face that I need to agree to the new TOS, even though I already did that. It won’t actually let me use the site.

7) Once again, I start over with a fresh browser window. Login. Add to cart. Pay. Download GFWL. Install. Download begins. Wow. It seems to be working?

8) Ten minutes later, my computer goes CPU-bound and freezes up. Now, I can’t prove that this lockup was the fault of GFWL. But Firefox was the only other thing running, and I can’t remember the last time I had a lockup like this. Just saying.

9) Rebooted. Start up GFWL. Hm. I was several megabytes into the download, but those were lost in the crash. It’s sitting at 0 bytes downloaded. It claims to be downloading, but after a few minutes nothing is happening. I pause the download. Then I resume the download, but the “resume” button doesn’t do anything. It’s like it’s not taking mouse clicks.

10) I hit cancel on the download. Then restart the download anew. Two minutes later GFWL locks up entirely. Thankfully, the rest of my computer is spared. I re-start GFWL and try again. This time it downloads for a whole fifteen seconds before it pukes and dies again.

11) A few tries later, and I learn that once the program crashes, you can’t ever resume an existing download. I’ve actually managed to download a little over 1% of the game. But the next time I start GFWL, it’s stuck. It won’t resume. It just sits there. You always have to kill the download and start over. 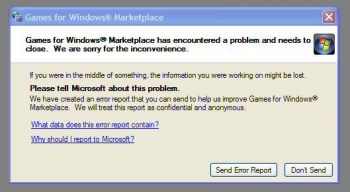 12) I google around a bit. I find a thread where a Microsoft rep suggests using Windows Update and download some .NET framework stuff. Two hours of updates later (I won’t drag all the shortcomings of Windows Update into this discussion) and my computer finally has the required updates. I start downloading my game, and five minutes later GFWL crashes.

13) One Microsoft rep suggests closing GFWL, and letting the game download “in the background.” Wait, so when I close GFWL it’s still running? It’s not visible in the system tray, or on the taskbar, but it’s there in the background eating CPU and bandwidth? Do I need to explain why this is a horrible setup and disrespectful of the end user?

14) I let it download overnight in the background. In the morning, I hit install. Halfway through the install it asks me for the product key. The installer explains, “You’ll find this number on your Certificate of Authenticity on the back of the CD packaging.” I kid you not.

15) There’s a little drop-down here where I can look up my product key. It’s blank. And hang on a second … why am I typing in a product key for a digital purchase, anyway?

16) More Google. I finally find an announcement that says, “Due to the overwhelming success of the Age of Empires III sale, we have temporarily run out of keys to unlock the game. You can still buy the game at this amazing price and you will get/see a key in the next week. When new keys are added to the system you will be auto-assigned a key, there is no need to call support or take any other action from your end.”

Really Microsoft? This is Games for Windows LIVE? This is your solution to Steam? The experience I outlined above wasn’t just a little rough, or a bit buggy. This was a comprehensive failure of an entire system from start to finish. I’m aware that it probably doesn’t work quite this bad for everyone, but even if we give them a pass for all the crashes, this thing is a mess. Keep in mind, this is not my first disastrous encounter with GFWL.

GFWL is three and a half years old. Steam wasn’t this abominable three and a half years after launch. GFWL has the home-field advantage of coming from the same company that wrote the operating system. It has better financial backing. It’s had time to mature. It’s got the Microsoft name behind it and the clout to secure deals with the big publishers. GFWL has every possible advantage in the world, and yet the folks at Microsoft can’t even get the system to perform the most rudimentary task of letting me buy a game and play it.

I ran both Steam and GFWL on my machine at the same time, to compare. GFWL used more memory than Steam. It ate more CPU. It has less features. It’s somehow actually slower to start, which is quite an accomplishment in the face of Steam’s usual dawdling. Its interface is obtuse and its policy of running invisibly in the background is a great way to create hard-to-diagnose problems for end users. And on top of all of this, it’s a buggy mess that crashes more often than a drunken Stevie Wonder playing Grand Theft Auto with a Wii Remote.

I’m of the opinion that spirited competition between digital delivery platforms would be a good thing. We want these companies to fight over our business and our loyalty. But this isn’t competition at all. This is just Microsoft griefing people for no reason. If this is Dancing with the Stars then Steam just came out and danced like Fred Astaire on moon gravity. Then Games for Windows LIVE came out on crutches, knocked over the scenery, and threw up on the judges.

Shamus Young is the guy behind Twenty Sided, DM of the Rings, Stolen Pixels, Shamus Plays, and Spoiler Warning. Yeah, he eventually got Age of Empire III running. It was all right.

The Week in Review: Legal Wrangling and Code Cracking