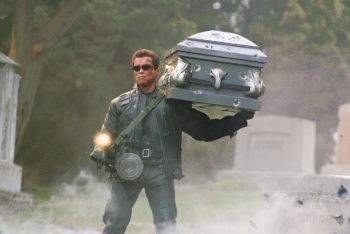 The Entertainment Consumers Association has announced that it will file a friend of the court document with the U.S. Supreme Court regarding its upcoming consideration of California’s “violent videogame law” and is asking consumers to help by signing a petition that will also be submitted.

The Supreme Court of the United States agreed last month to review a California law that would ban the sale of violent videogames to minors. It may look relatively harmless at first glance since most of us agree that minors shouldn’t be buying M-rated games anyway, but the case is far weightier than it appears because it directly addresses the question of whether or not videogames are entitled to the same First Amendment protections as other forms of media.

“The Court is going to listen to oral arguments on whether to agree with previous federal court findings or not,” explained ECA vice president and general counsel Jennifer Mercurio. “Agreeing would mean that they believe that video games are, and should continue to be, First Amendment protected speech; just like movies and music. The Court disagreeing would mean that video games should be treated differently, which the ECA strongly believes to be unconstitutional and could lead to new bills and laws curtailing video game access in states across the country.”

“The gaming sector, as a whole, has arrived at perhaps the single most important challenge it has ever faced in the U.S.,” added ECA President Hal Halpin. “The medium itself and how it, the trade, and its consumers will be perceived for the long term is at stake.”

In addition to the amicus brief, the ECA has opened a petition to establish “an authoritative collective position by American consumers of interactive entertainment” which will also be submitted to the court. “Anyone who cares about gaming should feel compelled to both sign the petition and encourage their friends and family to do similarly,” Halpin continued. “These documents will provide the court with one clear collective voice with which to vocalize our position and reinforce that we agree with the lower court findings: Games, like music and movies, are protected free speech.”

The Supreme Court is expected to hear arguments in the Schwarzenegger v. EMA case later this year or in early 2011. Gamers (and anyone else who believes in the sanctity of the First Amendment) who wish to sign the petition can do so at www.GamerPetition.org.