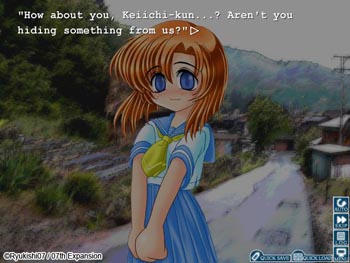 Three years ago, MangaGamer released a translation they weren’t happy with. Now they have the opportunity to redo it.

The visual novel series Higurashi: When They Cry was originally published in Japan from 2002 to 2006 with an English translation made available in 2009 to 2010 by MangaGamer. The PC games are one of many greenlit by Steam recently, and MangaGamer has stated it is considering redoing the translation.

“We’ve been aware that the original translation for Higurashi was not the best it could’ve been,” translator John Pickett told VNTLS. “The potential sales a Steam release means has given us an opportunity consider updating the translation. We’re currently looking at our schedule to see if such a vast revision is feasible, but it is something we would strongly like to do before this new release.”

Higurashi: When They Cry is a text-heavy mystery, supernatural, psychological horror game with anime and manga adaptations. The protagonist, Keiichi Maebara, moves to the countryside in time for a historic festival. Every year for the last four years, one person has been murdered and another has gone missing after the festival. There are multiple story arcs focusing on different characters as events change, and people in Keiichi’s group of friends are murdered or become paranoid.

The original MangaGamer release of Higurashi replaced the background music in some scenes and had to remove some rooms and a mini game due to copyright, as the developer in Japan was able to use songs without permission as a doujin game. The English text had grammatical errors, something quite distracting in a game that requires a lot of reading.

“We can’t wait to get this title out on Steam and show even more people the MangaGamer brand,” Pickett said.