Why does it need to be said that videogames are dumb, as journalist Taylor Clark insists? Clark says he wants to “splash some cold water in the face of any intelligent gaming fan who contentedly pays to be treated like a dimwitted child.” The assumption is that intelligent gaming fans are being insulted when they are proffered dumb games by developers, they don’t know what’s best for them, and most disturbingly of all, that they shouldn’t be entertained by dumb games.

What I read from Clark’s missives on the subject of dumb games is no small measure of shame for the fact that he derives joy from them. “I hesitate even to place a ballpark figure on how many games I’ve played in recent years, for fear of how it might strike my wife or future editors if they read this…” says Clark. The self-reproach of that statement highlights an issue endemic to nerd culture, which is a fetish for the smart.

It is a fetish I don’t understand. Being incessantly smart is lonely and isolating. It makes one difficult to relate to. It almost always leads to some kind of existential angst, all of which seems born out by Clark’s assessment of Braid developer Jonathan Blow. And the unavoidably arrogant implication of fetishising the smart is that if you aren’t enamored with or seeking it and enjoy the dumb, there’s something wrong with you.

It’s telling that when Clark pleads with the gaming audience to just admit videogames are dumb, he states we have to look at videogames “objectively” to grasp what he’s clutching at, and that his point of view depends on a dispassionate viewing of our games. Who wants to divorce themselves from their passion for videogames? If that’s what an erudite assessment of the intellectual potential of the videogame medium necessitates, I fail to see why the pursuit is held up as a virtue. And isn’t objective assessment of art generally accepted as an impossibility by thoughtful critics of any creative medium?

I will readily grant by Clark’s definition and argument that most videogames probably are dumb. So what? Why should we value the intellectual and the contemplative over the moments in Battlefield 3 when your squad crests a hill and someone shouts, “Holy shit there’s a tank coming kill it kill it!” Those are some of the best times I’ve ever had playing videogames, when my squad is running across a virtual battlefield and the world sounds like it’s coming to an end all around us in 5.1 digital sound and shells are exploding into the ground and tossing dirt in our faces and it’s absolute chaos and we love it. Battlefield 3 is certainly a dumb game by Clark’s assessment, and he utterly devalues the joy we feel from playing Battlefield 3 if and when he looks down his nose at it, and does the same for every other dumb game he might care to list. 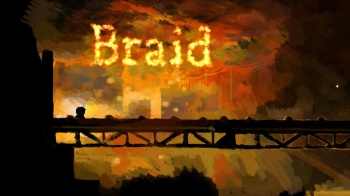 Braid is supposed to be a brilliant game. No one, in all the analyses and criticism and essays I’ve read about the game, has ever adequately explained to me why Braid is brilliant. I can only speak to the demo that completely failed to entice me into playing any further. I wasn’t interested in the mechanic of turning back time. It felt like an exercise in throwing artistically-evolved sprites onto a Mario-esque platformer. I wasn’t interested in collecting puzzle pieces of paintings. Maybe it was just a bad demo, or maybe whatever language the game spoke failed to engage me. That neither makes Braid a bad game, nor does it say anything about me other than I have individual tastes that a particular game failed to engage. Taking that discussion any further is unnecessary.

Blanket declarations about the intellectual rigor of an entire medium are equally unnecessary, and not very helpful. Those declarations do nothing for advancing the medium. They sound more like concern-trolling than an attempt to make things better. Artists don’t create what they create because critics bludgeon them over the head with the shortcomings of their work. In the best of cases, artists create what they want because they want to, or because those are the ideas that develop organically.

Ken Levine didn’t set out to make a game about Randian Objectivism that would become another Exhibit A in the games as art debate. He wanted to make a kick-ass shooter. The game’s thematic content flowed from the design process, and we got BioShock. Thatgamecompany may design backwards from an emotional aesthetic they wish to capture but did they create Journey because it was personally important to them, or because they were on a crusade to please the critics?

An indictment of the dumb also feels like an indictment of what it is to be human. The joy of enjoying dumb games is the joy of play. Sometimes it’s okay to be dumb, because sometimes that’s what we need, and it’s no surprise that our entertainment waxes towards the simple and the silly and the absurd. Calling this “juvenile” is to suggest adults have less of a need for these escapes than children do. I might argue precisely the opposite. There’s nothing wrong with the frivolous if it fulfills a need, and if instead we need something emotionally or intellectually fulfilling from our videogames we can find it. Those games do exist.

The hilarious irony of complaining about videogames being dumb is that if the goal of the critic or journalist making the statement is sincerely to try and make things better, their statement is dumb in and of itself by Clark’s definition. That’s not a very intelligent way to go about addressing the issue, especially if it’s a journalist or critic who can command page space in widely-read outlets. The best course of action is to continue throwing a spotlight on the game developers and their games that fit whatever criteria for smart is being described, and to throw that spotlight sans the mud-slinging toward everyone else.