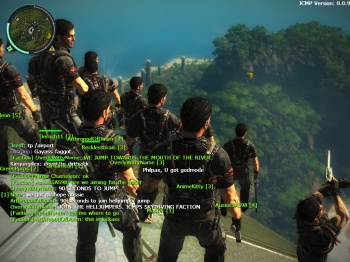 Avalanche Studios’ Just Cause 3 will be a single-player affair when it launches in 2015, though adding multiplayer modes post-release is a possibility.

After months of rumors and speculation, Square Enix and Avalanche Studios finally made it official: Just Cause 3 is coming in 2015. Don’t expect to hop online and enjoy it with your friends, though–the long-awaited third game in the series won’t have multiplayer at launch. Speaking with Game Informer, Avalanche co-founder Christofer Sundberg dashed fans’ hopes of being able to play Just Cause 3 with others–at least at first. “Maybe sometime down the line, we’ll take Rico into the modern world of multiplaying,” Sundberg teased.

The previous games in the series also shipped as single-player affairs, but a fan-made (and publisher-approved) mod for Just Caused 2 added an ambitious multiplayer component to the game, which Sundberg says has kept people playing it years after its release. “The mod is absolutely fantastic… We owe those guys a lot. They have actually supported the game and helped it stay alive so many years after it was released.” That doesn’t mean Just Cause 3‘s multiplayer potential is up to you, modders–Sundberg was quick to add that he doesn’t “expect the fans to make the multiplayer” for the next game in the series. The omission of multiplayer was a result of a strong focus on the single-player sandbox experience.

And as for the post-launch possibility of patching in multiplayer? With Square Enix’s cloud gaming subsidiary Shinra Technologies, it could be an option. No collaboration between Avalanche and Shinra (that was a strange sentence to type) has been officially announced, but Shinra’s Jacob Navok teased, “We’re working on a possible future collaboration with Avalanche Studios.” As for Navok’s vision of the future of gaming? “Cloud games that are developed from the ground up as well as games that are in an existing pipeline that we will enhance… For example, taking a game that doesn’t have multiplayer right now and easily giving it multiplayer is what we imagine for enhancements.”

Just Cause originally launched in 2006, where it was stuck in a weird in-between-generations period and appeared on the PC, PS2, Xbox, and Xbox 360. Just Cause 2 came out four years later on the PC, Xbox 360, and PS3, and received generally favorable reviews. Earlier this year, Sundberg stated that he thought the era of $60 AAA games was “not healthy” and said that publishers were “still stuck where we were 15 years ago.” We’ll see how Square Enix feels about the state of AAA games when Just Cause 3 launches next year.

The Walking Dead “Crossed”: Hurry Up And Wait