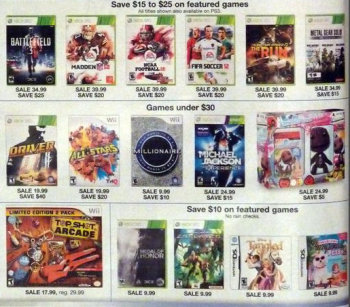 Kmart’s deals for Black Friday may just make getting up at 6 AM worth it.

Here in the United States, the Holiday Shopping Season is about to start. That means that retailers are vying for everyone’s patronage by announcing insane deals for Black Friday (which falls on November 25th this year). These deals often feature extreme discounts on videogames, and Kmart wants you to know that – should you be willing to camp out at one of its stores – there will be some very nice games featuring even nicer prices waiting for you.

According to Kmart’s Black Friday advertisement, here are just a few of the discounts that will be awaiting savvy shoppers (read: folks whose love for bargains verges on the unhealthy):

Presumably Kmart will also have some other big console discounts, but it remains to be seen just what they’ll be.