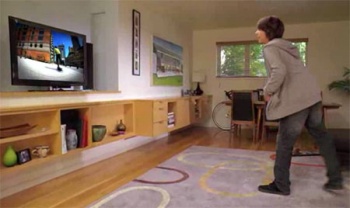 If you’re dying to know what games Microsoft will bring to Natal’s table, now we know about two more.

Microsoft has been fairly tight-lipped on the kinds of Natal games/experiences that it’ll be showing off at E3, aside from Ricochet, a ball blocking Pong-style game, and River Rush. Thanks to the LA Times, a couple more have shaken from the MicroTree.

The games were shown off to a “handful” of journalists in Redmond, Washington. Get ready, because their concepts are going to blow your not-currently-able-to-understand Natal mind!

First up, we have Living Statue. This game records players’ movements through Natal and translates them to their Xbox Live avatars. Finally, some life will be breathed into those little guys. Players can also sing along with their dancing or whatever movements they choose to make, and when finished will be able to email the disaster/masterpiece to their friends. This is supposedly a way to get Natal players involved with Xbox Live. Hm, I wonder if Living Statue will be misused somehow. Nah.

The second new Natal game is called Obstacle Course. The LA Times says it will have players “pull, dodge and jump” their way through, well, an obstacle course. I’m expecting to at least have to step through tires, jump over hurdles, and maybe a rope climb. Microsoft should definitely take this idea to the next level and bring Double Dare to Natal. I would be all over it if I could pick a flag out of the fake boogers of a giant nose.

Living Statue, Obstacle Course, Ricochet, and River Rush are most likely pack-ins with the purchase of Natal. The Times also says that about a dozen more Natal-licensed games by other developers will be shown off at E3 2010, which is next week.

Killzone 3 Trailer Will Freeze Your Butt Off

Itagaki Gets Bloodier Than Ever With Devil’s Third