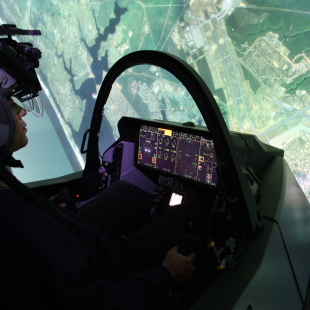 Jan Scheuermann, a 55-year-old quadripalegic, was able to control an F-35 flight simulator using a pair of electrodes implanted in her brain.

One of the most persistent visions of humanity’s future is the melding of man and machine. Whether we’re talking comic books, movies, television or literature, there’s no lack for people imagining the day when we’ll be able to swap out our puny flesh arms for bad ass robot ones or start our cars with a mere thought. Most would probably laugh at the idea as little more than wishful thinking or, at best, science fiction. Recent reports however, would indicate that we’re coming closer and closer to a time when such technologies are science fact.

More specifically, in a series of tests recently conducted by the Pentagon robotics program, a paralyzed woman was able to connect her brain to an F-35 flight simulator and control it with her thoughts. The woman, 55-year-old Jan Scheuermann, connected to the simulator using a pair of electrodes implanted directly into her brain. After connecting she was able to pilot the simulator “directly [with] her neural signaling.”

Speaking about the experiment, officials at DARPA expressed understandable excitement over what its success could mean for individuals with physical disabilities and humanity in general. “In doing this work, we’ve also opened this door,” said DARPA director Arati Prabhaker. “We can now see a future where we can free the brain from the limitations of the human body.” DARPA biological technologies director Geoffrey Ling reiterated this sentiment, saying that the organization has “stepped over a great threshold into what’s possible.” In other words, we’re one step closer to building Jaegers.

Readers may recognize Scheuermann from similar tests conducted in 2012 where her electrode implants were used to connect her to a robotic arm that she was then able to similarly control with neural signals. A quadriplegic, she lost the use of her arms and legs years ago as a result of a rare genetic disease. She described her work with the Pentagon as “an honor.”