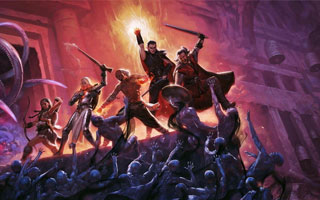 Obsidian Entertainment CEO Feargus Urquhart confirms that Pillars of Eternity II is in development at Obsidian, and will likely be funded through Kickstarter.

If you’re anything like me, you enjoyed Pillars of Eternity when it released last year. It’s the game our review called, “It’s the best new isometric RPG to come out in years.” It shouldn’t be stretch to understand why we’re so excited to learn today that a sequel is already in the works.

In an interview with Gamepressure.com during the Digital Dragons 2016 conference in Krakow, Urquhart said that the game is already being worked on, even if it hasn’t officially been announced.

“Obviously, as you’ve probably guessed, we’re starting to move forward on Eternity II. That is probably something that we want to look at [in terms of crowdfunding]. I think people felt like we delivered on our promise, and then that felt like we could go with Eternity II and people would support us again, because they trust us.

Eternity II is not announced, [but] it seems silly for me not to acknowledge it, though. If someone asks, ‘Are you working on it?’ I respond, ‘Well, wouldn’t you work on it?’ So then they say, ‘So you must be working on it,’ and then I’m like, ‘Well, yeah.'”

A sequel to Pillars of Eternity is great news, and it’s not a huge surprise to see the news that Obisidian will be returning to Kickstarter for funding. I wouldn’t expect an announcment very soon, though. Obsidian’s got a lot on its plate right now, including Armored Warfare, Tyranny, the Pathfinder Card Game, plus the Pillars sequel.