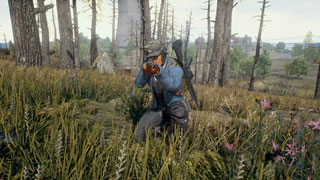 PlayerUnknown’s Battlegrounds is becoming one of the most popular games on Steam, and is on pace to pass up Fallout 4.

If you’ve been spending your gaming time in PlayerUnknown’s Battlegrounds, you are not alone. The popular shooter is now number four on the list of the most-played games on Steam. That’s not a huge surprise, as we already knew it sold four million copies in its first three months on Steam.

What you might find surprising is that in reaching that point, PUBG has surpassed GTA 5 for peak concurrent players. Its current number sits at 382,561 this week, with GTA 5 at 360,761. If it keeps up its torrid growth, PUBG will soon pass up Fallout 4‘s 471,955 concurrent player count, and reach the number three spot on the list.

PUBG is set to get first-person only servers in this month’s update, and developer Bluehole is currently running a poll to ask players how much info should be on the game’s UI. The game is $29.99 on Steam, and is still in Early Access.

Need higher framerates in PUBG on your Nvidia card? Try these tricks!