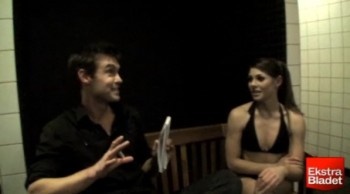 In what can only be described as a horribly uncomfortable clash between fantasy and reality, it turns out that the “real” Lara Croft don’t know much ’bout that archeology stuff.

Alison Carroll was anointed as the “official, real-life Lara Croft” back in August, and while she shares some obvious assets with the famed videogame heroine, interest in and knowledge of archeology obviously isn’t one of them. An interviewer with Danish television show Ekstra Bladet decided to ask the model a few easy questions about archeology, “just for fun,” but the results obviously weren’t any fun for anyone present.

Caroll, the Lara Croft model, seemed simultaneously perplexed by the questions and worried that her obvious ignorance would reflect poorly on Lara Croft. Her handler stepped in almost immediately to halt the questions, but the interviewer persisted, appearing surprised that his questions wouldn’t be allowed. “Carnage,” as 1Up described it, ensued.

I’m well aware that expecting an actress dressed up like Lara Croft to have a functional knowledge of archeology is completely unreasonable, but that doesn’t make the discussion between the interviewer and her handler over whether or not she should wear the “U R DUM” sign around her neck any less painful to watch. See for yourself here.