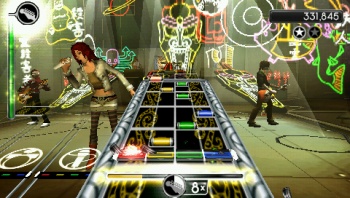 Rock Band gets Unplugged on the PSP this summer with some exclusive tunes, an in-game store for downloadable songs, and button-based gameplay that Harmonix says turns your hands into peripherals. That sounds a tad surreal.

Due for release on June 9, Rock Band Unplugged will be a PSP-exclusive developed by Harmonix in partnership with Backbone Entertainment. Gameplay will follow the Rock Band mold with guitars, drums and vocals, but translates it to “traditional beat match gameplay” complimented by Rock Band mechanics like overdrive/star power and chords. “Your hands are the ‘peripherals’ in Rock Band Unplugged,” Harmonix said.

The game will include most of the modes you’ve come to know and love from the Rock Band games, including World Tour, Band Survival, Warm Up and a “robust character creator” as well.

In terms of the playlist, the game will sport 40 master recordings including nine tracks making their exclusive debut in Unplugged before moving on to other systems. The nine tracks are as follows:

These songs and others will be available through Unplugged‘s in-game store for downloadable songs, which Harmonix is calling the “first fully-featured in-game store” on the PSP. The store will make use of your PlayStation Network ID, and you can also buy songs from your PC as well.