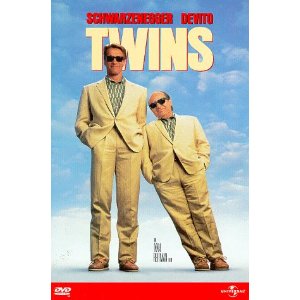 Over twenty years later, Universal apparently wants to make a sequel to Twins and thinks it’s a “gem of an idea.” Maybe they actually meant “charcoal briquette.”

Now that Arnold Schwarzenegger has called it quits with California politics, he’s reportedly thinking pretty hard about getting back to acting. However, instead of reprising his roles from the Terminator, Conan (yes, there’s a new one being made, but it doesn’t have Arnold … Or Grace Jones), or Kindergarden Cop, it sounds like someone wants his return to Hollywood to be in Twins 2.

Yes, you read that right: someone wants to make a sequel to the 1988 film that was directed by Ivan Reitman and starred Schwarzenegger with Danny Devito. Australian film site What’s Playing recently spoke to a source who is claiming that Universal’s been seriously kicking around the concept. According to the anonymous source:

“Knowing Arnold, Danny De Vito and Ivan Reitman are all still in touch and want to work together again, Universal came to them about it. It’s a germ of an idea that could spread fast.”

Let’s be honest about something: If the film gets the go-ahead, it might very well be a good movie, but it certainly sounds like a terrible idea right now. Also, if Schwarzenegger is going to get back in front of the camera, I demand a sequel to Hercules in New York.