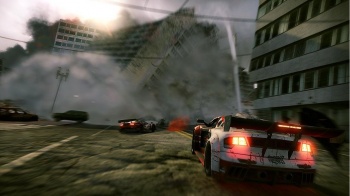 Out of respect for those people affected by the earthquake in New Zealand earlier this week, Sony has decided to pull MotorStorm Apocalypse, which features an earthquake-ravaged city, from New Zealand shelves.

On Tuesday, a magnitude 6.3 earthquake struck the Christchurch region of New Zealand, and has reportedly killed over 100 people and caused serious damage to buildings in the surrounding area. With that in mind, it isn’t too hard to understand why Sony Entertainment has decided to cancel the release of a game whose primary setting is a disaster-stricken city.

MotorStorm Apocalypse is the fourth game in the MotorStorm racing series, and the first to have a mainly urban setting. It takes place in a city creatively called “The City” which has suffered massive devastation from natural disasters. Many of the levels feature obstacles like falling buildings and collapsing bridges, which Sony believes may be too close to reality for some New Zealanders.

Reports are coming in that New Zealanders who pre-ordered MotorStorm Apocalypse are being notified that the game will not be released any time soon, but that Sony may still release it there at a less sensitive time.

MotorStorm Apocalypse will remain on schedule for other countries, and will be out March 16 in Europe and April 12 in the US.

Fable 3 Dated for PC, Plus DLC