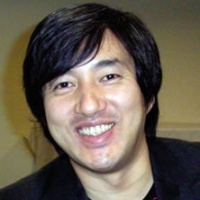 Suda51 does things differently than most game designers. His studio, Grasshopper Manufacturer, have made such games as Killer 7 and No More Heroes, strange, satirical and sharp-witted with always a trace of the zeitgeist about them. You can usually spot a Suda51 game a mile away, but if you’ve ever wondered how they take shape, you’re in luck.

In an interview with GameSetWatch, Suda51 was asked about how he ensures that his games have the distinctive Grasshopper feel.

“It’s not something that we deliberately set out to realize with each new project, although there’s naturally going to be a lot of the development staff’s own minds in any final product,” he said, “If you asked me what I consider to be Grasshopper’s most unique trait, it’s that we create games not by crafting individual parts and building them up like blocks, but by first considering what sort of emotional response we want to get from the player. That’s a big part of what makes a game Grasshopper-like, the message we try to send.”

He was also asked about wrestling, saying: “I have to admit, I probably don’t know much about more recent WWE stuff. The last guy I really followed was John Cena… It’s a pretty different story in Japan. There are promotions that work in a similar way, but in Japan it’s more of a pure contest to see who’s the strongest or the most popular.”

If you’re interested in what else he had to say, you can read the full interview here.