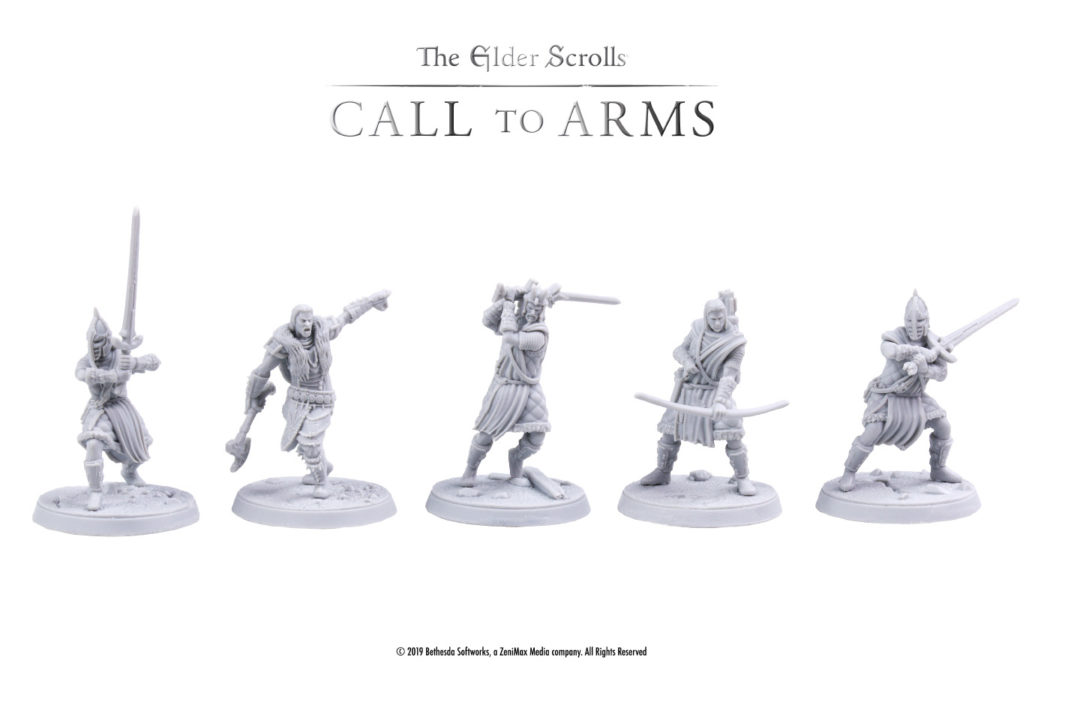 I’m an unabashed Elder Scrolls fan. There! I said it. I’ve played every game in the series since Daggerfall — which devoured far too much of my time as a youth — and I count Skyrim in my top three video games of all time. When Modiphius publisher Chris Birch revealed he was making an Elder Scrolls wargame, it felt like the stars had aligned. I had to do it … but how to do justice to a franchise I’ve loved for over 20 years?

I always describe myself jokingly as a “holistic games designer.” By that I mean I work top-down, deciding the story I want to tell on the tabletop and adding the specific mechanics later. With a licensed franchise, a lot of that story is already done for you, and with this game in particular, we had Fallout: Wasteland Warfare to draw upon mechanically. My first step was to take a look at what makes the Elder Scrolls tick — what do people love about it, and what essential elements would they want to play out on the tabletop? In essence, it boils down to the question: What should this game feel like.

One of the key elements when designing a game like this is deciding which aspects of the source material to leave out — it’s often just as important as the bits you leave in! Bethesda really understands that different media have different requirements, and urged us not to slavishly recreate every mechanic from the video game if it would make the tabletop experience cumbersome. You won’t see every individual skill increasing as you use them, even though that’s a key aspect of character levelling in the video games, but you will have a simple level up mechanic that abstracts all that character development into a single player decision.

The big things for me were making heroes feel truly heroic with cool abilities, customization options, and levelling up. They should be searching for amazing treasure, killing foul monsters, and doing battle. But all of these things should be linked in some way to quests. Heroes in Skyrim, Oblivion, and Morrowind always have a goal, whether it’s “fetch that skooma” or “save the world.” Modiphius’ Fallout laid a lot of groundwork for narrative, but because of the fantasy setting we needed to do a lot of streamlining. Monsters and adversaries are controlled by an AI system, but they’re much more commonplace in The Elder Scrolls, and so their rules needed to be simplified. Even the dice have been changed to make the heroes punchier and the magical effects of weapons and spells more frequent — players of Wasteland Warfare will find the basic game principles familiar, but the overall experience very different in feel.

The game is based on party exploration. In an RPG, you’d play a single character, much like in the video games. But in a skirmish game, you have a whole group to control. So we took a page out of the classic fantasy gaming playbook and have bold heroes leading bands of mercenaries and henchmen into uncharted territory to acquire fame and fortune. The Elder Scrolls saga has plenty of examples of these types of adventures — you might control an Imperial Captain and her unit of soldiers, or a Dragonborn with a motley group of followers, for example.

That’s one of the joys of the Elder Scrolls — there’s such a wealth of history behind this game series that we have almost too many factions and characters to choose from. It’s really important that every faction in the game brings not only unique models for the collector, but also its own play style. For instance, Imperials are stalwart, well-armored troops with high morale. Stormcloaks are far more aggressive and much better at melee attacks than defence. Adventurers don’t really have throwaway soldiers at their disposal, but they have lots of specialized heroes, making Adventurer groups small but elite. As we expand the range, we’ll be giving a lot of thought to each faction — maybe Bandits will work better in large numbers but be quite cowardly on their own; Thalmor use a lot of magic (even their soldiers have spells) and so on.

With that in mind, and given the popularity of Skyrim, we opted to start with Imperial Legion vs. Stormcloaks — with the addition of a Dragonborn who gets to choose a side. They’re natural foils for each other, equal but opposite. It opens up a whole world of scenarios, from the snowy battlefields of the Skyrim Civil War to the quest for the Jagged Crown in a darkened dungeon.

Every game you play will have a strong narrative element; it’s one of the most immersive games I’ve ever written. You can play either solo, cooperatively, or PvP. You don’t just pick a scenario, but also randomly generate an environment. You might end up in a Draugr crypt in pitch darkness, or a hilltop in the middle of a snowstorm, or a besieged town with civilians running for their lives. Once you’ve got the setting, you create your random event deck. Some of these are generic cards that can apply anywhere, such as booby traps and monster attacks. Some are environment-specific, such as secret passages in a dungeon, or a quest-giver NPC in a settlement. Finally, you draw a quest. This is the object of your game, and it’s personal to your party. Complete the quest by the end of the game and you earn a reward. Naturally, you can link scenarios together as a campaign, meaning that you can also complete linked quests in a sequence if you wish (find the ebony claw, learn the Dragon Shout, slay the master of the dungeon …). We wanted was a game where the narrative is integral. Even if you play a one-off game, it’ll never be the same twice and there’s always a story behind the conflict.

As a game designer, I always go on about rules and scenarios and background, but the real heroes of the hour (our very own Dovakhin) are the miniatures designers. The team has worked tirelessly, painstakingly recreating all our favorite heroes, soldiers, hired swords and monsters from the video game. As a longtime miniatures collector, it’s a dream come true to finally own and paint models from this franchise — and what’s this job all about if not to provide that sense of unadulterated joy at playing games? To expand one of the richest intellectual properties into a whole new dimension? We have lots of plans for this game. I just hope I don’t take an arrow to the knee before they come to fruition.

Mark Latham
Mark A. Latham is a writer, editor, history nerd, frustrated grunge singer and amateur baker from Staffordshire, UK. A recent immigrant to rural Nottinghamshire, he lives in a very old house (sadly not haunted), and is still regarded in the village as a foreigner. Formerly the editor of Games Workshop’s White Dwarf magazine, Mark still designs tabletop games (Chosen Men, The Walking Dead: All Out War, The Elder Scrolls: Call to Arms), as well as being an author of fantastical and macabre tales. His Apollonian Casefiles and Sherlock Holmes novels are published by Titan Books.