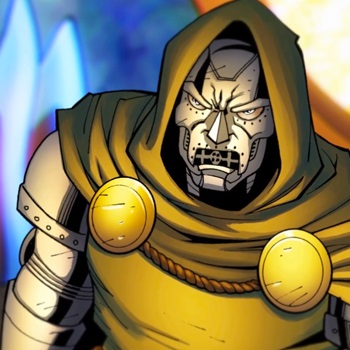 Images of the Fantastic Four’s most famous villain, Doctor Doom, have hit the web.

Fox might not be promoting the Fantastic Four reboot yet, but that hasn’t stopped some images of Doctor Doom from leaking. Take a look at the superhero family’s most famous foe, who will make an appearance in the reboot due June 19, 2015.

The reboot, which finished filming early August, stars Kate Mara of House of Cards, Michael B Jordan of The Wire, Jamie Bell, and Miles Teller. Tony Kebbel (Dawn of the Planet of the Apes) opposes the heroic cast as Doctor Victor von Doom.

New images from Geek Pride (the site is down at the time of this writing) reveal Teller in costume as Doom on a green-screen stage. Even though the film is not based directly off any comics, classic villains Doom and Mole Man have both been confirmed as antagonists, with Mole Man played by Tim Blake Nelson.

Doom’s costume looks less like armor and more organic for the Josh Trank directed Fantastic Four reboot. The lines, texture, and uniform color gives the impression that the traditionally metal armor might be replaced with some sort of growth. Maybe it’s something the Latverian gained due to cosmic radiation in an attempt by the film’s scribes to unify the origin stories of the heroes and the villains? Wait, wasn’t that the same origin in the past attempt at a Fantastic Four franchise?

We’ll see how Doom and the rest of the reboot works out when the film releases next summer. Fox is already banking on the film being a success, with a sequel already scheduled for July 14, 2017.

A Robot Riding a Hoverbike? You Can Own It