I love when articles and videos here happen to line up. Last week Extra Credits talked about choice and conflict in games. They cited World of Warcraft as an example of a game with a series of complex but fundamentally one-dimensional choices (my words, not theirs, go see the whole thing if you want the details) in allocating your talent points. I ran into just this sort of frustration this week, so I thought I’d break it down and talk about World of Spreadsheetcraft in more detail.

Before I get going, let me make it clear that WoW is not the only offender in this regard. It’s not even the worst. It’s just the most popular and so the easiest to talk about.

Way back in my very first column I talked about “giving the player authorship over the world,” which is a bit of a highbrow way of saying “choice.” Choices are good. Choices are interesting. Choices give games depth and replay value. Without choice, games are nothing more than a contrived linear series of reflex tests. World of Warcraft has lots of choices, but one place it falls flat is where it should shine the most: Selecting gear. Before they made WoW, Blizzard made the Diablo games, which are probably the zenith of equipment hoarding gameplay. In Diablo, you could agonize a great deal over what item you were going to use and weighing the various tradeoffs. In World of Warcraft, these choices are obfuscated under layers of extraneous complexity and hidden formulae.

In its simplest form, there is really only one tradeoff: Efficiency versus survivability. (Healing and PvP get more complex than this, but let’s stick to the vanilla PvE gameplay right now, which is where a majority of the player base spends their time.) You can equip an item that will increase your damage and let you kill dudes faster, but that means possibly sacrificing some sort of armor that might save your life. Do you like to live fast and risky, or do you prefer slow and steady? This is a simple, straightforward choice that can have far-reaching consequences for the equipment-minded player. Unfortunately, you rarely get to make this choice. Instead of weighing these tradeoffs, you end up trying to figure out if you’re making any choice at all, or if it makes any difference, and if so, how much.

Characters have over two dozen attributes. Some are derived from others in chains. Get more strength, you end up with more attack power, which leads to higher base damage, which increases your all-important DPS. Other stats are synonyms, like speed and haste. Other stats seem to overlap, like armor, parry, dodge, block, and resilience. There are tooltips for these which indicate the thinking behind them, but you’re always a layer or two away from those core ideas of efficiency versus survivability. It’s never clear just how much more damage you’ll do or how much more safe you’ll be. This is even before you have to account for mysterious variables like diminishing returns, hard numeric caps, soft numeric caps, and how your stats interact with those of the monsters you’re fighting. Does dodge rating apply to incoming spells? Does Parry interact with ranged attacks? What’s the difference between block and armor, since both seem to reduce incoming damage? There’s nothing in game to answer any of these questions, and so a majority of the players fumble around in the dark. 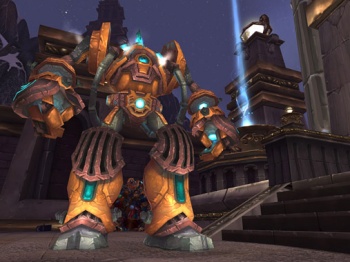 I’m not arguing that the system should be reduced to a single, obvious decision. What I’m saying that that you should never have more complexity than depth. The games of Chess and Go have relatively simple rules that lead to fiendish complexity, to the point where people have dedicated lifetimes to exploring their intricacies. (Compare this to tic-tac-toe, where spending fifteen minutes with the game will tell you everything there is to know about it.) Starcraft has complex rules, but those rules also lead to complex gameplay with great depth. But item selection in World of Warcraft is complexity without depth. Figuring out the rules is a serious undertaking, and you can spend hours reading the wiki and still not know everything. But at the end the decision is usually pretty simple: Does weapon A do more damage then weapon B? All that time spent crunching numbers, just to answer a straightforward question.

Veterans of the game tell me that gear doesn’t matter all that much when you’re leveling. I’m sure they’re right, and it’s a shame. That means the player is regularly being presented with complex, boring, non-decisions and an entire dimension of the game is going to waste.

The system is actually better now than it was a year ago. In Cataclysm, a great deal of the system was streamlined. But the underlying problem remains and I don’t think it would be possible to fix it. (Fixing it would mean starting over, and there’s no way players would stand for that. The time required to acquire the highest levels of gear in the game is phenomenal, and it would be horrifying to rob those players of their accomplishments with a reset.)

For me, a better system would be one where the decisions are easy to understand but difficult to make. Decisions that are interesting for players are things like:

These are all good tradeoffs, and players could have a lot of fun agonizing over choosing the item that best suits their taste and playstyle. But as it is, the only decision players are given is to decide if they care enough to look this one up on the wiki and run the numbers.

Also the armor should look less ridiculous. That’s not related to the rest of the article, but it needed to be said.

Shamus Young is the guy behind Twenty Sided, DM of the Rings, Stolen Pixels, Shamus Plays, and Drawn to Knowledge. Please don’t suggest plugins to him to fix these problems. He knows, he just feels you shouldn’t need plugins to make a game less obtuse.