A little over a decade ago, the sum total of gaming news could be condensed into a rumors page in the front of a magazine. The rest of the magazine was filled out with previews, reviews and the occasional feature or interview. Looking back, even though the issues were huge phone books, they were more like catalogs than actual news sources. Sure, there were exceptions, but these magazines delivered what most of the gaming populace wanted – pretty pictures and coming attractions. The information was, befitting the size of the industry, a carefully controlled trickle into the gamer’s cup of knowledge.

In the intervening years, the internet took hold and the industry grew exponentially. The floodgates were opened and now, I find myself beer bonging information on a daily basis. Drenched in quotes, gossip, vendettas, Photoshop mock-ups and unconfirmed screenshots I trudge forward each day attempting to make sense of it all.

The volume and availability of videogame news is such that a game is no longer just a game, it is the sum total of all its rumors, layoffs, and outlandish PR quotes. The media build up to a major game can actually overwhelm the experience of the final product. Maybe Assassin’s Creed wouldn’t have been as memorable if it had lacked the countless trailers, Jade Raymond’s smiling face and webcomic controversy. It’s a magnificent mess, the lead up to a modern game release, and it makes the old PR friendly magazine model look stale by comparison.

This information overload initially led me to Analysis Paralysis. There was so much information to consume that it all turned into white noise, my brain unable to act on any of it. The excitement a new preview might bring was broken up into a thousand little pieces of blog postings. Developer comments and rumors created a cracked mosaic of viewpoints on the game or situation. Gaming news became another consumable, there for my brief entertainment. I became fixated on details like new combat systems and multiplayer options. None of which ever influenced my final purchasing decision.

This is symptomatic of the way I used to consume all my information a few years ago. It all ran through me and I made very little sense of it, nor did I let any of it spur me towards deeper discussion. Blogs became an enormous and nonsensical information dump. I think the rise of internet communities like 4chan’s /b/ and all the stereotypes associated with forum culture arose as a literal expression of the confusion caused by information overload. Overwhelmed by Analysis Paralysis, forum culture, and by extension the way people engaged with news, became largely reactionary. 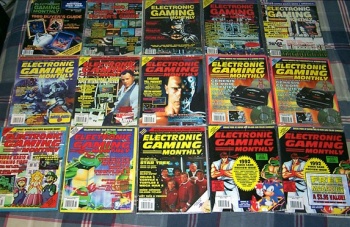 But out of all that chaos I realized that something like a worldview was emerging. The fascinating thing to me about videogame news is that it has expanded far beyond the realm of industry information. On the news feed of The Escapist on any given day you’ll find postings about studio closures mingling next to a post about a life size Gundam being erected in Japan. Videogame news, as most sites present it, is really an all encompassing cultural overview. It’s an attempt to make the whole world relevant to videogames. There are both successes and failures in doing so. At its best, game news fans out across mainstream culture and brings new interpretations to otherwise tired subjects. What do MMO playing habits reveal about human behavior? At its worst, videogame news can be merely infantile – a direct play into the hype machine that once comprised the totality of videogame news. It’s not news in the traditional sense, but it is a far more informative reality than the one that existed in 1996.

What is for certain is that I no longer feel like I’m just organizing a world spoon fed to me by the creators of my favorite pastime. The monoliths are gone. Companies have personalities, not all of them benevolent, and the process that shapes the eventual outcome of a game is becoming more transparent. The developer feuds, information leaks and uncensored quotes all lead towards something closer to reality. In my recollection, videogame print was like a glass menagerie: A delicately preserved world that was as combative as a price guide. I lived in a state of ignorant bliss where games were all on a level playing field, and if they disappeared one day, after months of hype, nobody gave it a second thought.

Videogame news coverage may not be perfect in its present form, but at least it’s dealing in the realm of adults. Studios close, developers fight and publishing companies sue the hell out of one another. Contrast this reality with videogame magazines at their peak. They provided hundreds of pages of content with each issue, but don’t ask me to recall a single personality, scandal or confrontational moment. I remember the games and some of the photos. However, I’m willing to bet that once people remove their rose colored glasses, most of these magazines, if they could look through them now, are incredibly empty.

Of course videogame news still has plenty of room for improvement. There are hundreds of columns available on the topic if you want more elaboration. I don’t lament the state of industry news, though; it is improving in leaps and bounds and the people reporting it steadily becoming more tenacious and fearless. The fact that Gerstmann-gate was even covered is proof of that. There is something sad about the passing of those huge window shopper videogame magazines. But, just as players and the industry have inevitably matured, so too did the news.