As I stared at a limited edition Akuma statue online yesterday, I was simultaneously torn between feeling “this is really cool” and “why the hell would anyone buy this?” The dramatic pose and thought of Akuma adorning my desk was tempting, but at $120 I was finally convinced he was best left as an in game experience. That’s what’s so puzzling; I made the connection with this cool character in the videogame and it’s in the game that I will remember him most fondly. Why would I spend any money on an inanimate statue?

If you’ve been a gamer long enough chances are you’ve stumbled upon or been tempted to purchase some sort of gaming related merchandise. Maybe it was the Halo cat helmet or a Solid Snake statue. These collectible items are common across all of Geek culture – whether it’s the meticulously replicated light sabers or the dramatically detailed and posed statues – fans are awash in resin sculptures, plushies and replicas of equipment associated with their favorite franchises. Add to this the fact that Kidrobot has a multilevel store in NYC dedicated to vinyl figurines, and its clear the love of the tchotchke has moved beyond fad towards something more enduring.

Geek memorabilia is the cookie jar collection of our generation. Someday, 150 years from now, the Antiques Roadshow equivalent will delight viewers with tales of Ma and Pa Bucket as they find out their Gundam model collection is worth 4,000 clams (clams being the currency of the future). However, I think the greater likelihood is that none of this stuff that Geeks are collecting so ravenously will be worth a damn thing in 25 years. The Pikachus, tricorders and Ryu posters will be unceremoniously dumped in the next big move to a new house or cubicle. Maybe a few people are collecting with an eye for value, but for me the fascination is more psychological.

At this year’s NY Comic Con I was inspired to buy some Revoltech giant robot figurines. These five inch statues sit on my desk, collecting dust, conversation pieces for no one, only slightly less weird than a Troll doll. But when I bought them, I was utterly enthralled for a day. Media is, in many ways, fleeting and there’s a strong desire to somehow capture the experience of it in something physical. Cartoons and videogames are especially ripe for this because they present us with images that just beg for some sort of tangible interpretation. As cinematic as Final Fantasy VII was, for many fans the ability to see and touch a Square licensed Cloud Strife statue is yet another way they can further connect with the game. Although these statues will be treated like the expensive pieces of craft that they are , locked away in glass cases, surely there is a thrill in briefly touching the character usually stuck behind the glass of a television screen. 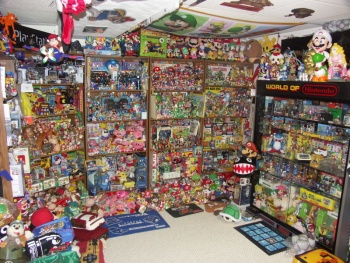 Merchandise can also act as a statement of identity. What better way to show a love of Asian culture than with a Kidrobot Munnie caricature of a famous cultural icon. No doubt The Pip-Boy 3000 digital clocks, which came with the Fallout 3 limited edition, sit proudly on nightstands everywhere as bedroom defining ornamentation. And, as the term memorabilia implies, these tangible pieces of otherwise ephemeral experiences act as a quick way for people to conjure up scenes and moments associated with their favorite pieces of media. A glance at my pose-able robots instantly reminds me not only of the cartoons I watched with them in it, but also of that period in my life. For a few minutes, the responsibilities of the work day wash away and their value is made clear.

However, I’m not afraid to call a spade a spade. The Akuma statue isn’t art, and the supposed rarity of any of these items – only 10,000 available! – is something of a sales tactic. I am just fooling myself if I believe the plastic Pikachus, limited edition Oblivion pogs (if only) and Gears of War Lancers are more culturally significant than my aunt Maude’s cookie jar collection. But that doesn’t mean collecting cookie jars is stupid, or that carrying a Lancer on a gun rack in your car is tacky.

Merchandise is, at face value, a cynical enterprise. But I wouldn’t trade it for the world. I wrapped myself up in wicked combination of toys and cartoons as a child, and the power fantasies of He-Man became my own. Perhaps that’s why media related merchandise has become so popular over the past few years; the idea of this inseparable combination was normalized by a generation raised on Transformers, He-Man and G.I. Joe.

As stupid as I find most of the videogame special editions, with their plastic figurines, and as overpriced as I think the dramatically posed Master Chief statues are, there will doubtless be a piece of merchandise that captures my imagination, that I want to pose proudly on my desk for all the world to see. Just as generations previous have done with their baseball cards and bijou posters, I’ll look at my Shadow of the Colossus statue, fondly remember my time with that game and hope that it will inspire a reaction of curiosity or fascination from other people who encounter it.

Despite what he may have said, mounting a Lancer on a gun rack in a pick-up truck is tacky.