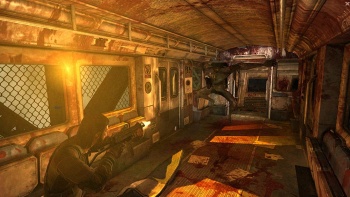 Warner Bros. has locked down the release date for F.E.A.R. 3 and unveiled three retailer-specific preorder bonuses.

F.E.A.R. 3, the third part of and fifth game in the cool but increasingly incoherent F.E.A.R. FPS franchise, was originally targeted for release in time for the 2010 holiday season but in August was pushed back to 2011 for reasons unknown. Now we’ve got something a little more specific to work with: March 22, 2011, will be the day Paxton Fettel, the Point Man, Alma Wade and the rest of the happy gang return for another round of horror-packed violence.

Preorder bonuses have also been revealed. Amazon is offering a 12-page F.E.A.R. 3 comic book to fans who lay down their money early, a prequel to the game written by Steve Niles, illustrated by Stefano Raffaele and published by DC Comics that bridges the gap between the original F.E.A.R. and the new game. Gamers who preorder at Best Buy will get The Shredder, “a choice weapon for taking down rogue super soldiers” that fires heavy rounds with nitrates, while Gamestop has what I figure is the coolest of the bunch: The Hammer, Paxton Fettel’s personal sidearm from back in the days when he actually needed one. The Hammer fires .50 caliber rounds and does almost twice the damage of a standard pistol.

The new chapter in the F.E.A.R. saga will apparently see the Point Man, the hero of the original game, team up with his not-quite-dead brother Paxton as their mother Alma, pregnant with the love-terror child of Michael Becket, the hero of the second game, struggles to come to terms with her impending motherhood, inflicting unimaginable psychic horror and trauma on the world around her as she does. Or something like that. Got all that? I don’t, and the F.E.A.R. continuity is such a mess at this point that no 12-page comic book in the world is going to set it right. So I’ll take a gun, please!

Play Zork on a Real Typewriter