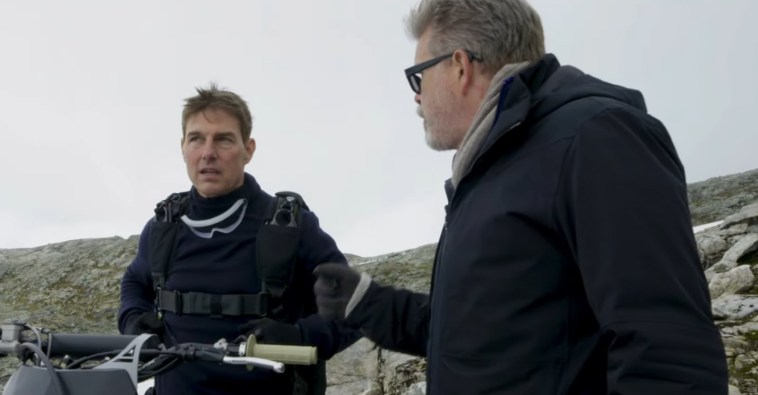 Tom Cruise had some weird childhood dreams. Most of us think about going to the moon or maybe being a fireman. Tom Cruise? Tom Cruise dreamed about driving a motorcycle off a cliff into a base jump, or so he claims in this absolutely bonkers behind-the-scenes look at the upcoming Mission: Impossible – Dead Reckoning Part One, which features a stunt in which Cruise does exactly that.

By this time we all know that Cruise is absolutely batshit crazy on many levels, but the level that benefits us is that he loves doing his own stunts. And it makes his action set pieces, whether they be in jets or on motorcycles, so much better than anyone else’s out there. As we saw in the breathtaking trailer for the upcoming Mission: Impossible – Dead Reckoning Part One, at one point in the film Cruise’s Ethan Hunt drives a motorcycle off a cliff and then parachutes to safety. Launching oneself off a cliff into oblivion just to pull a parachute out of nowhere is a pretty standard action trope at this point, but having your leading man do it himself is something entirely different. The short documentary goes behind the scenes on what it took for Tom Cruise to get the Mission: Impossible motorcycle cliff stunt right (six times), including 500 skydives and 13,000 jumps on a dirt bike.

Obviously, we don’t know the end result as the movie isn’t out yet, but it will probably be as amazing as Cruise’s other outings in the franchise that were directed by Christopher McQuarrie. The film itself is the first of a two-parter that may be bringing an end to the franchise, or at least Cruise’s involvement in it. There is little known about the plot outside of what we’ve seen in the trailer, but it appears Hunt and his lovable gang of people who do impossible missions with him are embroiled once again in international intrigue. What we do know is the film is packed with action and that this stunt, which Cruise trained more than a year for, is just a small part of it.