Five Nights at Freddy’s is a successful series and an even finer fantasy world because it manages to do so many things right. It takes the “jump-scare” technique popularized by the Slenderman games and puts that into an original setting that is simply designed, yet somehow interesting enough to demand people’s attention. Despite the simple objective of the game (don’t lose track of the animatronic monstrosities), people just can’t seem to get enough of this game.

In titles like the Slenderman series, the backstory is paramount, and can be discovered in a separate series of YouTube videos on the marblehornets channel. FNAF departs from this type of external lore discovery for a more “atmospheric” way of worldbuilding. Scott Cawthon described what these animatronics were at their core in an interview from September 2014: “That’s one of the things that makes these “creatures” so scary in real life. If you’ve ever been to an animatronic show at a theme park or a restaurant, they can be creepy when they move, sure. But it’s when they are turned off that the veil is lifted, and you realize that they were never alive. They are, and always have been, dead.”

But to fully explore and understand the story of Five Nights at Freddy’s, one has to play the game and look in every nook and corner for an explanation of the events. This captivation with the FNAF lore has made people go as far as decompile the .exe files of the games themselves, and look at the individual textures and sounds separately. Scott Cawthon created a series that takes a direct journey to the depths of uncanny valley and shows you the dark side of what was supposed to be innocent entertainment for young people. He also does this in a way that requires attention to the game itself, rather than any external sources, and so I guess you could say the devil, or the “Freddy” in this case, is in the details. But in order to understand how exactly this works, an understanding of the games’ narrative must first be understood. 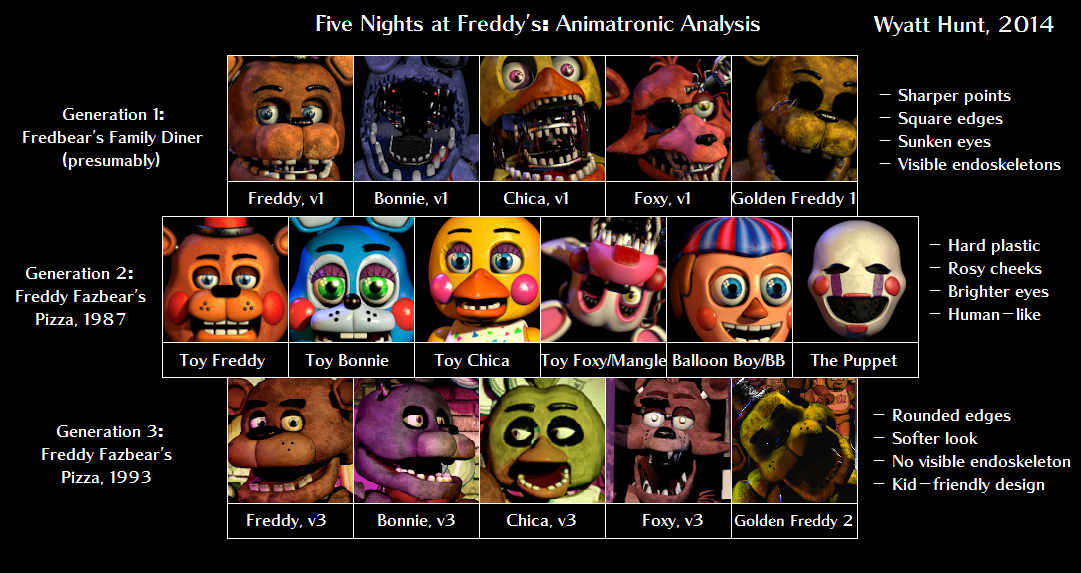 The story of Five Nights at Freddy’s is scattered about different sections of one timeline. While there is some confusion about specifics, the general idea is that the player is watching over a bunch of haunted animatronics at night from 12 AM to 6 AM and tries not to get spooked by them.

● Five Nights at Freddy’s 1: November 8th to 13th, 1993. A Freddy Fazbear’s Pizza revival takes place, and the CEO cuts corners by making few rooms in their building, making power supplies limited at night, and only reassembling four of the animatronics: Freddy, Bonnie, Chica, and Foxy. Mike Schmidt is hired as the night guard during this time and the player takes the role of him during his work shifts. Unaware of the haunted nature of the machines, workplace incidents begin to occur and the company is forced to shut down in the weeks following the events of the first game.

● Five Nights at Freddy’s 3: Takes place long after the events of Five Nights at Freddy’s 1 and 2, about thirty years since the closure of the establishment. The horror stories of Freddy Fazbear’s Pizzeria inspire someone to create a horror themed attraction “Fazbear’s Fright” based on the old legend, using the same haunted props themselves in it for authenticity. The player takes control of a night guard, facing “Springtrap,” a haunted animatronic that is possessed by the soul of someone who tried to destroy the haunted machine monsters and got trapped inside one themselves.

● Five Nights at Freddy’s 4: Takes place before Five Nights at Freddy’s 1 and 2. An easily frightened child is fearful of seeing the animatronics at Freddy Fazbear’s Pizzeria, and the player takes control of them in the five days leading up to their birthday party at the restaurant. At night, the kid’s overactive imagination causes him to see scary monsters try and get into his room. The player’s job is to make sure the kid’s sanity stays intact. 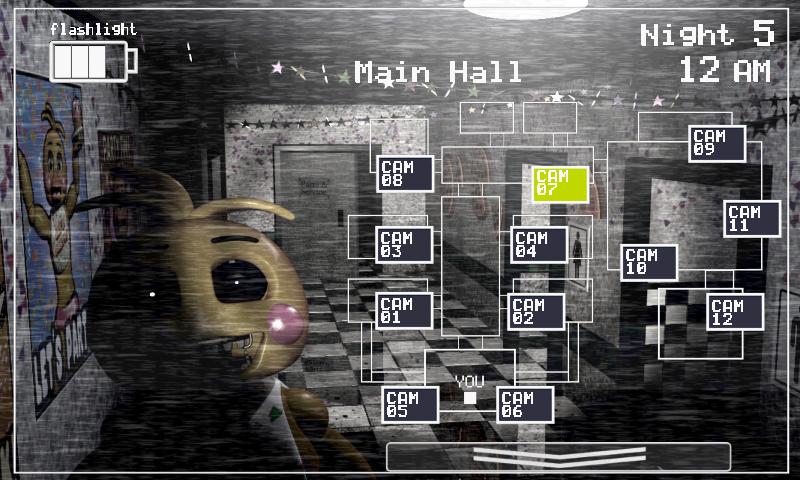 The feeling of powerlessness of the main character in FNAF is done perfectly. The characters in games like Slender Man and FNAF don’t have a weapon for self defense against the unspeakable horrors they face. On a surface level this is for amping up the spooky factor. People playing these games wouldn’t be as scared if they were a big bulky special ops navy seal with access to military grade explosives and rockets. Instead, players and characters are both average people, just trying to put together the puzzle, and in FNAF this is taken a step further. The main character in FNAF is security personnel meant to GUARD, rather than destroy these monsters. They CAN’T shoot the animatronics because they would get fired by the people that hired them for damaging the equipment and filling it with bullet holes. But that’s what’s cool about FNAF – the powerlessness and limited defenses of the player – have a solid base in the reality of the game that adds to the story, rather than takes away from it.

Secondly, the context behind the “jump scares” of FNAF themselves adds to the atmosphere of the game. When the animatronics manage to “get” you, they don’t just kill you. Instead, according to the man on the phone from FNAF 1, the animatronics drag you to an empty animal suit and attempt to jam you into it, a ghastly end that might also create a new animatronic horror. The concept of FNAF’s jump scares is connected to the story of the game itself. In the Slender series of games, the player received damage to their sanity by looking at the Slenderman, but in Five Nights at Freddy’s the player can’t look away from them for risk of becoming one.

Five Nights at Freddy’s is both a terrifying and captivating series simultaneously. The tale of how exactly Freddy Fazbear’s pizzeria fell into disrepair and became haunted has people combing through every last inch of the game’s locations for clues. The only way to progress is for the player to face their fears and master the monsters’ intelligence to avoid becoming one themselves. In this way, the horror of FNAF is not of dying, but of becoming an undead monster, doomed to haunt the halls of an abandoned restaurant and torment the same people that they used to be.

The FNAF series is certainly a special one. Without Cawthon’s attention to detail, and the mechanics of the game which allegorize feelings of helplessness and anxiety, supported by the story itself, this series would not have the gravity it maintains. FNAF is an example of how lore and gameplay can work together to create not just an excellent horror game, but also an incredibly immersive game that explores the depths of childhood’s worst fear: animatronics and death.