Separating the television personality from the real life figure is a challenge with a scandal like this one.

I write a column about television, which means I’m practically obligated to weigh in on The Bill Cosby Story. That I waited a few weeks to do so was partly about wanting to afford the news cycle proper perspective, but also (likely moreso) about a general sense that I didn’t belong anywhere near the front of the line on this one.

The fall from grace of Bill Cosby — and the privilege of adding my voice to the reaction to it — “belongs” to me only in the sense that it “belongs” in general to any TV viewer or resident of popular-culture, yes. But it belongs much more to women watching justice (social, if not legal) come once again overdue for a powerful (alleged) abuser in a society that implicitly mistrusts their word in general and especially when leveled against powerful men; and also to multiple generations of black Americans who are seeing a figure of legendary stature who was foisted upon them (by the media and also enthusiastically by Cosby himself) as a singular role-model of proper success brought low by his own (alleged) monstrous behavior. Being of neither group, it felt incumbent not to rush to the forefront (or however close a Z-list internet fixture like myself can get) as though my take is the one everyone was waiting for.

This feels especially true since a big part of The Story this time is what brought about the renewed, more potent than ever “push.” Initially, the revived outrage against Cosby (who, for the record, is accused of having drugged and raped a succession of women over several decades) wasn’t actually based on any “new” information. The majority of allegations had all come and gone through the tabloid news cycle years ago, briefly discussed and then forgotten. That they gained traction now was largely attributed to comedian Hannibal Buress making reference to it in a standup set — a clip of which quickly went viral.

So, yes, it’s easy (and not at all inaccurate) to shake one’s head at the shamefully-evident prospect that one man’s off-the-cuff punchline counts for more than decades of detailed claims by twenty women. What else is new?

To be fair, though, what’s more manifestly different this time is what’s different in all long-time-coming watershed moments these days: social media. Twitter and Tumblr activism have their critics (and have deserved them) but there’s no reasonably disputing that the difference between “then” and “now” in cases like these is that The Internet’s ability to nullify temporal memory-cycles — to leave events and ideas sitting atop the Trending Topics as “new” until activist dedication says otherwise — makes it impossible to let The Public move on and forget. 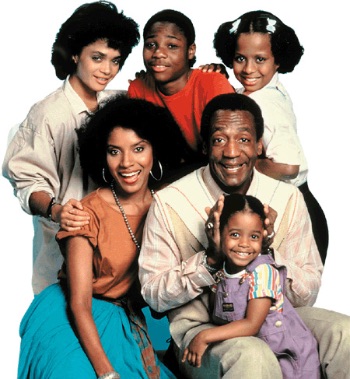 Also, while the sad fact of one male observer’s comment somehow counting for more than twenty women’s actual experiences is a valid part of the discussion, to let it sit free of context ignores the very real weight and meaning of Buress daring to take even a broad swipe at Cosby. Black comics in particular have long been “allowed” to take their potshots at, say, Eddie Murphy’s career missteps or even the late, great Richard Pryor’s tabloid peccadillos… but Bill Cosby and (especially) The Cosby Show legacy have been for decades the “third rail” of black American pop-culture.

Like most paradoxically “post-racial” icons (see also: Obama, Barack) Cosby’s existence as a public figure has been inextricably bound-up in the politics of race, class and identity from the beginning: As a comedian, he was the voice of universality between black and “mainstream” points of humorous reference. As the co-lead of I Spy and creator of Fat Albert he was at the forefront of black television visibility. And in the groundbreaking Cosby Show he set out (and succeeded!) to do nothing short of making THE face of the Reagan-era New American Dream — aspirational-affluence coupled with renewed familial-stability — a black face.

To mock, speak-against or even openly disagree with the erstwhile Doctor Heathcliff Huxtable was (framed in the culture) to be “ungrateful” for his work at advancing black culture. Even in recent years, as Cosby embraced a new public role as a voice of (socially) conservative scolding against elements of black pop culture — railing against African-esque baby names and entreating young Black men in particular to “Pull [their] damn pants up!” — to be anything other than reverential to Bill Cosby was to spit in the face of the man who told black gen-Xers and millenials coming of age in a culture still smarting from Civil Rights battles and the generational wounds of systemic racism that they could grow up to be doctors and lawyers with big, beautiful homes and bigger, loving families.

Hence the distinct tinge of “rage at (surrogate) father” indignation in routines like Buress’, or in the words of SNL news anchor Michael Che, who prefaced his quietly wrenching admission of wanting to find a way to separate Cosby the man from his television personality (“[He] practically raised me!”) with “Hey, Bill Cosby? Pull your damn pants up!”

Ironically, what made Cosby seemingly invincible in the past — his, for a time, successful “branding” of himself as TV’s Favorite Dad and, more particularly, THE icon of the successful post-racial black male — seems to be what’s making it so hard for him to shake now that the matter has crossed the rubicon. The omnipresence of the all-knowing patriarch has lessened dramatically in 21st century pop culture and most visibly on television. It’s also become increasingly en vogue for black-themed (or black-starring) television to question The Huxtable Ideal: One of this fall’s more successful new network series is Black-ish, which features Anthony Anderson as a successful family man who comes to worry that his children don’t identify enough with their own heritage.

Bill Cosby is not the first man of his stature to be brought down by a scandal like this, and The Cosby Show won’t be the last undeniably positive work of fiction to be thusly tainted by the actions of its real life creators. We will, unfortunately, have these discussions again and again. What comes of it is up to us — as we once again try to square the presence of a public icon with unforgivable real-life horrors… and how “complicit” we’re made by our own willingness to accept televised fame as an alibi.

Quiz: Name That Not A Christmas Movie Movie