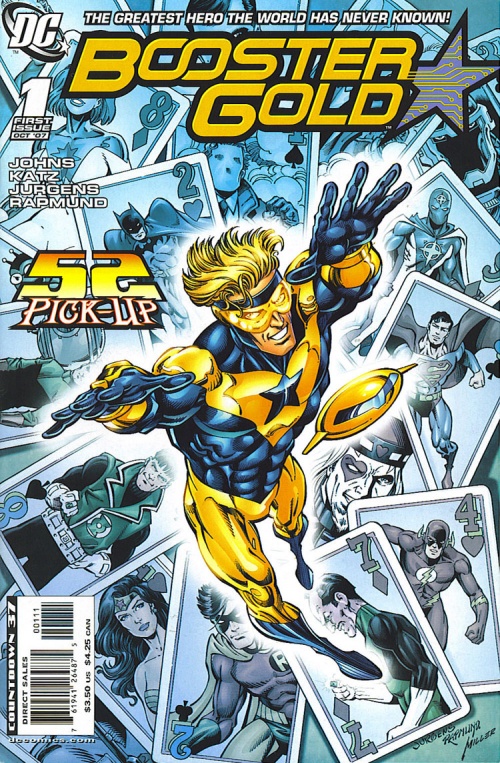 Welcome to “What’s Actually Good,” the bi-weekly look at what’s currently out and what’s to come in the comic book industry. This week I will be looking at Booster Gold from Geoff Johns and Mark Millar’s upcoming Kick-ass.

If you have ever been a longtime fan of any of the myriad comic book heroes, you would know by now that most have exceptionally complicated continuities that only grow more complicated with each issue. Even the most experienced editors and ardent fans find it hard to know it all, let alone understand or control it.

Be that as it may, DC and Marvel still love nothing more than faffing about with the continuities of their own characters to the point of blithering frustration for the fanboys and great confusion for the rest of us. There are a number of reasons they do this: The character is already confusing, convoluted or simply needs a modern reboot, and there are many books that change, warp or outright remove a character’s history in favor of a different one.

The examples that first come to mind of course are the different DC Crises, which were seemingly made to bring structure and order to DC’s heroes, and the most recent events in Amazing Spider-man, where it seems that now Peter never actually married Mary Jane. Continuity confusion ahoy!

This brings me to a book that not only delves into the continuities of the many different characters its universe possesses but adds to them, is funny in the process and, most importantly, actually works. The book in question is the new Booster Gold series by Geoff Johns, now five issues in.

The story goes that Booster Gold must travel through time with Rip Hunter and right the wrongs of some rogue time travelers so the world’s greatest heroes are still around in the future to come. Booster must not only save the universe a million times but also must go about it completely unrewarded and unknown. Hilarity! Over the last few issues he has saved the life of Superman’s grandfather, inspired Sinestro to create the Sinestro Corp, made sure lighting hit Barry Allen and tried to save Batgirl from the Joker.

The best thing about this series is it has so many opportunities to be the cliched, convoluted crap that usually comes with being a time travel story but still manages to be entertaining, thoughtful, funny and full of the heart Booster Gold fans love.

If any writer were qualified to delve into the abyss that is DC continuity it must be Geoff Johns. He has had a hold on the DC universe for years now and written for almost every major character. His Flash run was fantastic, his JSA continues to get better and better, and his work on Green Lantern promises huge changes yet to come. Better yet, Johns himself has an obvious love of Booster Gold, inspired by the ’80s mini-series and the brilliant JLI book by Giffen of the same era. The new book has the same comedic tone all Booster books should have, and Johns’ expertise on the character shows.

Take a look at Booster Gold if you have a real love and vested interest in the future of DC. If you are a fan of the old JLI days with Booster and Blue Beetle, you are going to get a kick out of this, as well. However, if you are new or only really casually interested in the DC universe characters, you might not get as much out of this book as your average fanatic. But that’s OK; it’s still entertaining enough for anybody to really enjoy. The sixth issue should be available in a few weeks.

Next Page: What’s actually good about what’s to come. 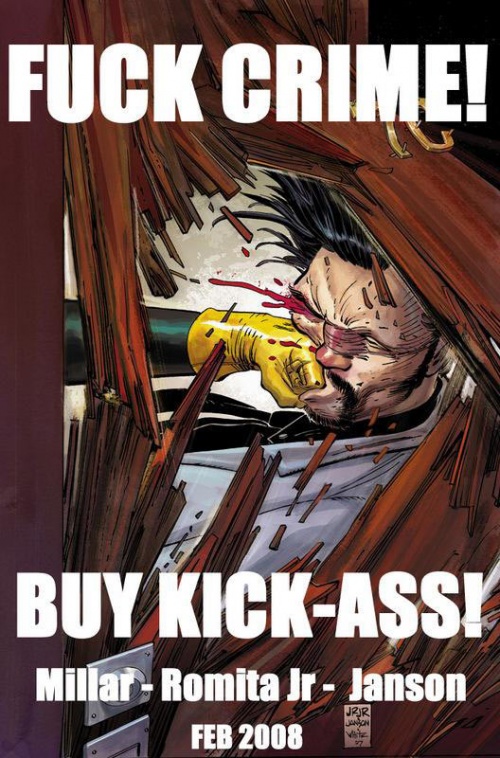 The comic I’m most excited about in the months to come is Kick-ass, by Mark Millar. It’s his newest creator-owned work being published under Marvel’s Icon print and will be available sometime toward the end of February.

The book tells of an ordinary boy who decides to put on a mask, grab a baseball bat and go out there and fight crime. Sounds simple enough. Of course he has no powers, there are no real superheroes and he has no idea what he is getting himself into. All he knows is that he wants to kick ass and take names.

As far as a superhero book goes, it has a unique, if simplistic idea. Also, if you are in anyway familiar with Mark Millar, you know if there is one thing he writes well, it’s violence. Millar’s works contain some of my favorite action scenes and jaw-droppingly cool moments. He has written for the X-men, Authority and most famously the Avengers with his Ultimates and the battle royal extravaganza Civil War, each with their own unique Millar touch.

Heres a list of some of my top Millar moments:

Points for whoever guesses which books these are all from.

There’s many more. Even the solicit appears to be in on the action, claiming that Kick-ass is “the comic that starts where other super hero books draw the line.”

Another good reason to check out the book is for John Romita’s artwork. When it comes to violence, he is on top of the pile. You really only need look at World War Hulk or Wolverine to get an idea of what he can produce.

So, is a book about a superhero without powers in a totally realistic setting going to take some of the romanticism away from what we usually find within the genre? Or will Millar’s writing still manage to imbue all the heroism, action and passion we usually love in a regular superhero book into Kick-ass?

I’ll be waiting to see. You should too.

In quick important news, the wondrous Poms from 2000AD have started digitally selling the book online. By the time this article gets up, up and away it should be available here. I would recommend everybody to at least check out a few issues and see where some of the great writers like Alan Moore, Grant Morrison and the aforementioned Mark Millar all contributed at one point or another.

Stay tuned in two weeks, when I look at three unique books each delving into the epic poetry of Homer: The Infinite Horizon, Age of Bronze and Marvel Illustrated: The Iliad. Find out where heroes really came from and how the tales of old are represented today.