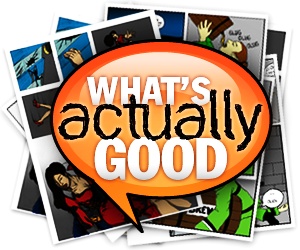 Welcome to What’s Actually Good (In Comics), the column that asks the question: Is it true that Alan Moore’s beard ghost writes half his scripts? This week I look at Matt Fraction’s The Order and jump up and down in a rabid nerd frenzy for Bendis’ upcoming Secret Invasion. All this along with a liberal splattering of news and other junk. Check it out!

There is nothing worse than a brilliant book ending prematurely. Sadly, this happens more often than I would like to admit, and given the general quality of most books that do very well, it really frustrates me when one that is obviously outstanding has to end. I like to think of these events as our very own call to arms, our bat signal in the sky or buzzing super watch, and I like to do as much as possible to help promote the comic and give it a second chance.

Such a terrible thing has happened with Matt Fraction’s The Order, a unique team book published by Marvel, now up to its seventh issue. To arms, my friends!

The Order tells of the superhero group set up to protect California after the Civil War saw government sponsored superhero teams being assigned to each separate state. The teammates themselves each have unique backgrounds, from teenage pop idols and ex-alcoholic TV personalities to soldiers, orphans and sports stars. It’s these different characters and personalities alongside the pressures of being government-funded that make this book so appealing. In each issue, we not only get the ongoing story but also an interview with a specific character, helping us understand their motives for joining the team.

It reminds me of Milligan’s excellent X-Static. Not only are the characters trying to save the world (well, California), they’re also trying to juggle a newfound celebrity with their own skeletons in the costume closet. This leads to the inclusion of a team PR agent, which seems only prudent in today’s modern world. It’s a superhero book through the lens of celebrity culture.

Barry Kitson has pencil duties and does a great job with these new characters. I have always been a fan of his run on DC’s Legion of Superheroes, and it’s good to see him on a new book, and with an exclusive contract with Marvel to boot. It’s sad that his work with these characters has to end, but I hear he’s moving to do some Amazing Spider-Man shortly, which should be great.

The book is being cancelled on the 10th issue, although Matt himself insists in a recent interview that “it wasn’t cancelled. I killed it.” He goes on to say he was given the chance to end it how he wanted to, and that’s what he chose. Fair enough.

It’s clear the great stories found within this series couldn’t have been done with heroes we were already familiar with. While it’s unquestionable that both Marvel and DC make the most money from their iconic and popular characters, I wish we did see more new characters introduced into the universe. Ideally, a book would sell purely on its storytelling and artwork. Sadly, this really is not the case. And although there are examples of good books with new characters, such as Runaways and The Initiative, taking off these seem like the exceptions rather than the norm.

Matt Faction is a great writer; his books deserve to sell more. Try and also keep an eye out for his writing in Punisher: War Journal, Casanova and Invincible Ironman, as well as his work alongside Ed Brubaker on The Immortal Iron Fist and a new Thor mini, too. Phew! 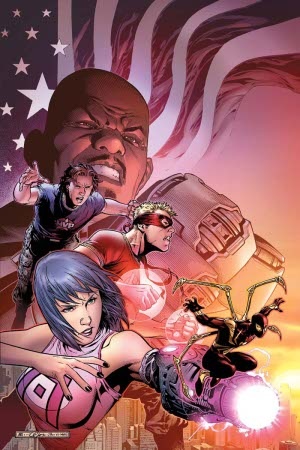 Big, huge mega-events from either publisher are generally not the reality-warping, internet-exploding, mind-boggling tales of drama, mystery and suspense they are usually made out to be. I have developed a hard skin and fine cynicism toward them, and tend to roll my eyes more than I experience them popping out of my skull when one makes an appearance. So imagine my surprise when I find myself actually looking forward to Brian Michael Bendis’ Secret Invasion.

In my eyes, the key to a big event is to keep it small or contained. Sounds odd, I know. But if an event is contained, you have less chance of continuity fuck-ups and better structured stories. It’s awful having to buy a book you wouldn’t normally touch to get the entirety of an event.

This is a lesson Marvel has learned. We have an idea of exactly which books shall be tying in with Secret Invasion, and the list is not huge. In fact, Bendis insists that reading all the books up to the miniseries itself is not necessary (although New and Mighty Avengers are both great).

In an earlier interview, the most exciting thing I found was Bendis saying these few words: “I’ve planned this for years.” Going into these things without a clear idea of how it will end is almost always revealed in the quality of the work, and the story of Joss Whedon swooping in to save the day when the writers were working out how Civil War should climax is a good example of what I think shouldn’t happen. Bendis has a plan; it will be the culmination of all his stories from Disassembled and Secret War, right through his Avengers run.

The story goes that certain members of the Marvel universe are in fact Skrulls – that is, shape-shifting aliens that more than once have attempted to invade Earth. The difference now is they are also perfectly mimicking powers of the people they are replacing, and have seemingly been working for a long time to infiltrate both the heroes of Earth and the governments, including super spy agency S.H.I.E.L.D. What Secret Invasion will see is the Skrulls making their final move against Earth and her heroes. The heroes don’t know who is a Skrull and who they can trust. As the story progresses and the Skrulls make themselves known, we will see exactly how they infiltrated the group and what their grand plans are for Earth.

The artwork will be supplied by Leinel Yu, who recently finished his run on New Avengers superbly. His pencils are crisp but at the same time harsh and have an almost savage quality. In the larger fights, his panels are a wonderful mess of heroes, villains and violence brought forward with vibrant colors from McCaig. Hopefully this team sticks together for Invasion.

Secret Invasion hits stores April 2. Check it out. Ten dollars and a pizza says Jarvis is a Skrull. 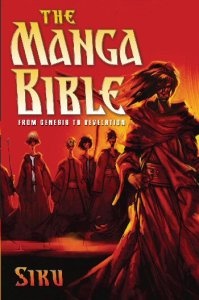 In other news, a graphic novel has been introduced into German schools to help teach the kiddies about Hitler and the Holocaust. The move has largely been well received, as it was documented that your average German teenager knows next to squat about what actually went on around World War II. Comic books being used as an educational tool? Sounds like a great idea to me.

I’m not a fan of this stuff usually, but the news that there is a Manga-style retelling of the Bible portraying Jesus as a superhero piqued my interest. The Manga Bible is supposedly unique because it’s an action-packed retelling of the Bible as opposed to a straight, uh, port. The website is here, if you are interested, and has all the books broken down into New Testament and Old.

This issue’s award for worse piece of dialog in a comic book comes from Superman Prime in Countdown No. 13 for this little ditty: “I’ll kill you! I’ll kill you to death!” In a completely serious, non–sarcastic, non-ironic way. Just as the issue numbers are in descending order downward to Final Crisis, Countdown still manages to lower the bar.

Old school LucasArts and comic fans alike will be pleased to hear that the original Sam and Max comics are being reprinted. The comic series that was first published in 1987 and spawned the games should be available for purchase in late February.

Stick around next week for a review of Hickman’s stunning Pax Romana and exactly why I am looking forward to DC’s Trinity. Yes, not a single Marvel book. Amazing, I know.