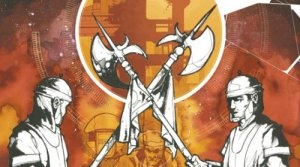 Welcome to What’s Actually Good (In Comics), the column that looks at two books that are, well, actually good, as well as a bit of choice news and thuggery. In this issue I discuss Jonathan Hickman’s Pax Romana and take a look at Mark Bagley’s upcoming work for DC with writer extraordinaire Kurt Busiek on Trinity. All this and more for your unexclusive enjoyment. Holy torpedo!

I live in a house full of fine arts students, so whenever a comic comes out that has great artwork, I always try and make them read and appreciate the book in an attempt to legitimize my interests to them. This is actually harder than it sounds. As you can imagine, somebody who spends their days painting cardboard boxes to hang in the living room or studying the pre-revolution work of French neo-classicist David has little interest in my gaudy superheroes. I am pleased to say, however, that Jonathan Hickman’s Pax Romana gets the artiste’s tick of approval, and I mean this in the best possible way. Allow me to articulate.

Jonathan Hickman is by no account your average comic artist and writer. In his work, including Pax Romana and the earlier (and excellent) Nightly News, he demonstrates a unique blend of comic book storytelling and graphic artistry. He is/was a graphic artist first, and this shows. His pages vary from traditional panel layouts to a seamless exploration of graphic artwork with vivid and striking use of colors and a fine blend of painted and penciled lines. Some pages he literally stuffs with information, holding your attention. With each page, the stylistic beauty of the layouts and artwork captured me before I had even read a single word.

Remarkably, the story is quite unique as well. In the far future, the Catholic Church has invented a time machine, and has decided to send a Church-led modern army back in time to the founding years of Christianity so that they might make the world a better place in God’s image. Despite this, Hickman insists on the last page of the book that “Pax Romana is not about religion – it’s about sociology.” Don’t expect this book to argue the merits of organized religion; instead, enjoy the foundations of a new universe where a medieval setting and modern agendas collide.

The first issue was released in December, and the next issue should ship on March the 5th. This unique artistic style in a comic could potentially be the future of the medium. Pick it up.

DC’s Big Three represent the most iconic characters in comics. Superman, Batman and Wonder Woman are household names and have, for decades, taught us the meaning of truth, justice and the universal (let’s be modern) way. Individually, however, their comics are not the best selling, with the three rarely breaking into the top 10 sales-wise. Now they have been given their own comic, aptly titled Trinity. While the characters appear in their own titles as well as team books in Justice League of America and Superman and Batman, this new series shall feature the trio in their own unique adventures.

So why am I so excited about this? Two reasons. First, Busiek is writing it. If there is one thing Busiek can write, it’s the good guys. His work with superhero comics is legendary and books including his outstanding Astro City, Marvels and, most recently, Superman reveals a writer who knows the importance of a hero, specifically the Boy Scout type such as Superman. He knows what makes a superhero tick (perhaps rivaled only by Grant Morrison), and by taking on these three perfect characters I hope to see him write them as heroic as they can be.

Second, I am looking forward to Mark Bagley taking on pencil duties for the book. My fondest memory of Bagley’s work came with his heralded ’90s run on Amazing Spider-Man, but most would recognize his work on the first 110 issues of Ultimate Spider-Man with Bendis and, most recently, on Mighty Avengers. Trinity is Bagley’s first book with DC and his new exclusive contract, and from what we have seen already, he has his own unique take on the characters. One of his most celebrated characteristics is his speed, always getting a book out on time and often doing more than one issue a month, something that shall be important given Trinity‘s form.

The book shall be published weekly, not unlike 52 or Countdown, and feature two stories. Bagley is pencilling the first 12 pages, and the second are being co-written with Nicieza and featuring a mix of different artists. While Bagley is only writing half the book each issue, it still equates to the equivalent of two full issues a month (phew!).

Trinity shall hit the shelves for a full year in June. If you like the weekly episodic style that DC has employed these last two years, then check it out.

A sneak peak of Batman: Gotham Knight is now available. The animated feature bridges the gap between the last Batman film and the new one. It seems likeThe Animatrix for Batman. Actually, that’s exactly what it is.

Warren Ellis just kicked off his new webcomic with art duties being performed by Paul Duffield. The first thing I noticed when I read the first six pages was the amazing artwork. Easily leaps and bounds above anything else found on the web.

It seems that the Justice League movie will no longer be filmed here Down Under. Too bad; they could have joined the illustrious group of other comic book movies filmed in Australia such as Superman Returns and Ghost Rider. Oh, burn?

And now some actual comics news. I was interested to find out that J. Michael Straczynski announced at WonderCon that he will be working on some DC projects. This, however, does not mean the end of his relationship with Marvel, and he will continue with his ongoing work with them as well.

Coming up in the next issue of What’s Actually Good, I enter a state of cathartic bliss when I review two great books: Grant Morrison’s All Star Superman and Brian K. Vaughan’s new Wolverine mini titled Logan. Be here for that in two weeks!