Movies aren’t the only thing to get excited for in 2015. Here’s the TV shows we’re looking forward to this year.

Not sure what to watch with your favorite shows gone for the winter? Fortunately, there’s plenty of TV entertainment headed our way in 2015.

AGENT CARTER, Premieres on ABC, January 6
While Agents of S.H.I.E.L.D. takes a month off to recharge its batteries after blowing up the Marvel Universe, Hayley Atwell gets seven weeks (night 1 is a double-length showing) to transform a reprisal of her starmaking turn from Captain America: The First Avenger into a new kind of TV girl-power icon. Though a decorated spy/soldier during WWII, Carter finds herself in the same boat as many women in the immediate postwar world — namely, forced back into secondary positions as The Men return to their jobs. But when Howard Stark needs a hero’s help keeping rogue technology out of villainous hands, she’s the first person he turns to. Unlike Agents or the the Netflix projects, Marvel Studios is throwing the full weight of their film-production arm behind this one, so it should be pretty entertaining.

THE NIGHTLY SHOW WITH LARRY WILMORE, Premieres on Comedy Central, January 19
Previously titled The Minority Report With Larry Wilmore (the title was changed after a series actually based on the Minority Report franchise was greenlit), Comedy Central’s replacement for the dearly-departed Colbert Report has been described as more of a direct counterpart to The Daily Show, but closely focused on news and current events humor from perspectives often ignored or mischaracterized by the mainstream press.

BACKSTROM, Premieres on Fox, January 22
Is the “near-sociopathic antisocial grump who lords his/her inhumanly superior intellect over everyone else who’s forced to put up with them because their unorthodox process solves unsolvable mysteries” genre played-out at this point? Probably, yeah. But as a guy who’ll still stop everything to watch a good re-run of House, I’ll give this one a try. It helps that it’s also a star-vehicle for Rainn Wilson, based on a popular series of Swedish crime novels. Looks so far up my alley I want to skip ahead to when it’s been on for 12 seasons and USA lets me watch it in 5 episode blocks every other night.

THE JACK AND TRIUMPH SHOW, Premieres on Adult Swim, January 29
Robert Smigel’s Triumph: The Insult Comic Dog gets his own show (opposite Jack McBrayer) on Adult Swim. Why wasn’t this already a thing?

CSI: CYBER, Premieres on CBS, March 4
So, yes, it’s probably going to be awkward watching Patricia Arquett follow-through on a transition to TV-procedural purgatory now that her film career is relevant again post-Boyhood. Still, the backdoor-pilot for this computer-crime spin-off was amusingly idiotic, and a full-series expansion has the potential to provide much-needed unintended comedy on the airwaves. And besides: Without CSI’s and Chuck Lorre sitcoms, how would good TV know what it was aiming to be better than? 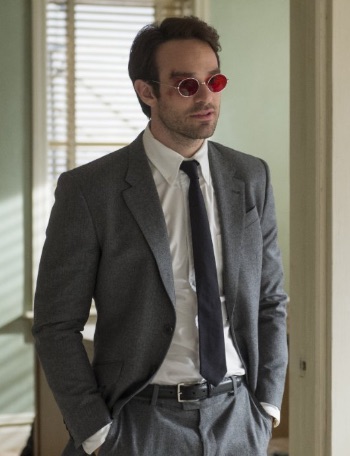 DAREDEVIL, A.K.A. JESSICA JONES, Premieres on Netflix, May
On the plus side, Marvel Studios using the direct-to-Netflix model to add the criss-crossing adventures of four darker, “street-level” vigilantes (Luke Cage and Iron Fist will join the blind lawyer and the superhuman private-eye in the near-future, leading to The Defenders) to its Cinematic Universe continuity sounds like fun. On the potential downside, this project is being overseen by much of the same team responsible for the uneven first season of Agents of S.H.I.E.L.D., (Agent Carter, incidentally, is actually being run by the studio’s feature-film division) leading some to suggest that the reason that series improved so dramatically in Season 2 is that its bad influences were busy making these. We’ll find out once they premiere, but I’d call it a bit worrisome that we still have yet to see Daredevil in his proper uniform…

THE COMEDIANS, Premieres on FX, Spring
There’s an alternate universe out there, somewhere, in which Billy Crystal ignored his own ego’s siren-song and went into the network TV late night talk show game instead of trying to prolong his movie star bona-fides. (Imagine if he’d taken over for Carson instead of the noxious Jay Leno??) I’d like to go there, but failing that I’m hoping for good things from this sitcom about a pair of generationally-divided comics (Crystal and Frozen’s Josh Gad) working on a fictional series instead.

WESTWORLD, Premieres on HBO, 2015
Michael Crichton’s 1973 novel (and its classic feature-film adaptation) are just about the perfect sci-fi thriller premise: A high-tech adult amusement park populates themed “worlds” with lifelike androids that allow human guests to live out their various fantasies, which sounds like a great idea until said androids start to malfunction with deadly results. The new series adaptation on HBO, a joint creation of J.J. Abrams and Jonathan Nolan, will feature Anthony Hopkins as the park’s proprietor.

SEX&DRUGS&ROCK&ROLL, Premieres on FX, 2015
As a blood-born Son of Boston, I am bound by a code you cannot hope to understand to support anything Denis Leary does — at least at first. But even if I weren’t, returning to FX (a network whose credibility he was largely responsible for building via the excellent Rescue Me) for a series about a washed-up rock star working his way back from the brink sounds pretty perfect.

THE DESCENDANTS, Premieres on Disney Channel, 2015
It seems like everyone forgot that this was happening… but it is in fact still happening. Set in a sharednuniverse kingdom populated by the flesh-and-blood incarnations of characters from Disney animated features, the pitch here is a high school dramedy following the teenaged children of Maleficent, Jafar, The Evil Queen (from Snow White) and Cruella DeVille as they become the first “evil” characters admitted to an exclusive private school previously restricted to the offspring of their parents’ “good” enemies. Disaster waiting to happen or stroke of demographic-targeting genius (the main foursome look like someone bought Slytherin House a Hot Topic shopping-spree)? I’m curious to find out.

ASH VS. EVIL DEAD, Premieres on Starz, 2015
I’m the exact age and temperament of film geek where, when the news is Sam, Ivan & Ted Raimi re-teaming with Bruce Campbell for a canonical continuation of the Evil Dead franchise… you don’t need to tell me one more damn thing. New movie? Video game? Board game? Card game? Freemium mobile app? TV series? Doesn’t matter — I’m there with bells on. The new premise (Ash on a road-trip with a pair of younger allies in a post-Army of Darkness world amid a Deadite outbreak) sounds an awful lot like “The Walking Evil Dead,” but I’ve heard worse ideas; and the last time Raimi & Company put together a project for Starz it was the mighty Spartacus, so you bet I’m looking forward to this one. Hail to the king, and all that.