I’ve always been a fan of long-running serialized fictions. Whether it was following the cast of the Hernandez Brothers’ decades-spanning comic series, Love & Rockets as they aged in real time, or keeping up with the labyrinthine underworkings of Baltimore in The Wire, there’s something that’s always appealed to me about following characters for a long period. It gives them time to breathe and grow, more than would be possible in a single movie, book, or episode of a TV show.

It would stand to reason, then, that videogames, with their emphasis on sequels and long-running series (just look at Mega Man‘s 120+ sequels and spinoffs) would be the perfect vehicle for telling massive, several year spanning epics. Unfortunately, that’s often not the case.

Many videogame sequels aren’t really sequels at all, but rather games connected by motifs and mechanics. Supposedly there’s some kind of chronology to Castlevania‘s 20+ titles, but you’d never know it. As long as we can plow through a castle slaughtering zombies, lycanthropes, and apparitions en route to Dracula, we’re happy. We’re not exactly the most demanding bunch when it comes to continuity in storytelling.

And there’s good reason for that; videogames series are hard to keep track of. They take a long time to play, come out on different systems, and date themselves quickly. It’s no wonder few rely on presumed knowledge as they don’t want to alienate newcomers.

BioWare’s Mass Effect series is ambitiously fighting the odds with its story-heavy trilogy that carries over all the player’s choices between titles. If you want to catch up with the story so far before beginning Mass Effect 2, you’ll have to go through hours of running from point A to point B shooting enemies, driving the Mako, and mucking about in your inventory. Granted, this is what makes it a game, but it also makes it a time sink as well.

If all you want is story, you could read a Mass Effect wiki to recap the plot in a matter of minutes. Though if you’re a “learn by doing” person like me, or want to take advantage of its imported choices, you’ll have to put in a 20+ hour investment playing it. To put that in perspective, one could watch the entirety of Party Down‘s two-season run in half that time and feel like they’ve spent much longer with its characters.

While combining plot and character development into gameplay is tricky, length can be changed and episodic gaming could prove more inviting for those catching up with a series. Committing to 20 hours can be intimidating, but chopping it up into several smaller chunks meant to be played separately is easier to swallow.

Half-Life 2‘s episodic content provided tantalizing nuggets of story while their brief four to six hour length made them completable on a lazy Sunday afternoon. This would have worked brilliantly had the episodes actually stuck to a short release calendar, but with 16 months between Episodes One and Two and Episode Three MIA for the past three years, it seems that Valve bit off more than they could chew. This was not the case with Telltale’s bevy of episodic adventures. Sam & Max, Tales of Monkey Island, Strong Bad, and more recently Back to the Future have pleasingly held up their end of the bargain, each month releasing a two to five hour episode of the various series on time. 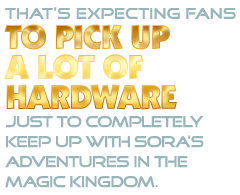 Long-format storytelling is also difficult in games is due to hardware incompatibilities. To play Shenmue (legally), you’ll have to dig up a Dreamcast and order the disc online since very few retail stores carry games older than a few years at most. De Blob 2 is available on PlayStation 3, Xbox 360, and Wii (as well as a separate DS version), yet its predecessor was a Wii exclusive. Those who own a Wii might be able to track down a copy of de Blob, but those with only a PlayStation 3 or Xbox 360 may not be so eager to jump into a game with a “2” in the title if they haven’t played its predecessor.

This was also the case with the convoluted Kingdom Hearts series. The first game was a PlayStation 2 exclusive, but it had sequels on the GameBoy Advance, Nintendo DS, and PSP. For a series steeped in heavy mythos, that’s expecting fans to pick up a lot of hardware just to completely keep up with Sora’s adventures in the Magic Kingdom.

Even if we have the necessary hardware and spare time required to start an ongoing series from the beginning, games are a medium reliant on ever evolving technology, making it harder for them to withstand the test of time. Graphics, control methods, and even game design are constantly changing and what was the norm a decade ago often feels archaic when viewed under the harsh lens of the current time.

When I tried to play Metal Gear Solid 3 I found it completely impenetrable, having not played the first two. What I found was a game that controlled terribly, had awful voice acting, and didn’t look as good as what I’d grown accustomed to. This was all par for the course at the time and it was still a great game, but playing two older games before I could fully appreciate one new title was a herculean effort that many would simply not bother with.

Making matters worse, Metal Gear Solid itself was a sequel to two games from eight and 11 years prior, the second of which was not released in America (until it got ported to PlayStation 2 as bonus content in Metal Gear Solid 3: Subsistence). Getting into the series late, I’d assumed that Metal Gear Solid was a reboot, but its storyline is heavily predicated upon events most players would have no knowledge of without the internet. At this point as the series requires Cliff Notes just to get into.

It doesn’t help that the industry is obsessed with focusing on the latest and greatest. Our popular game magazines and websites focus mostly on reviews and previews, but less so on retrospectives or critiques. While I’m certainly biased as I make a living keeping up with gaming, even before I worked in the industry and had the freedom to play whatever I wanted, it felt like there was some kind of intangible force pressuring me to play whatever new big hit had just come out. I wanted to be part of the ongoing conversation, and it’s a fast-moving train.

While there are plenty of sequels out there, so many of them are only tangentially related and not interested in telling a larger story. Even good sequels like BioShock 2 were not intended when the first game was created. Original IPs are a big risk, and creating one that doesn’t tell a complete story is an even bigger one. It worked fine for Assassin’s Creed, which grossed enough for a sequel, but eight years later, we’re still waiting for Beyond Good & Evil 2 to wrap up its predecessor’s cliffhanger ending.

As much as I love the idea of an ongoing series where every plot point matters, this is an especially difficult proposition for videogames as they have greater barriers of entry than any other medium. They’re long and plodding relative to how much essential narrative they contain, it can prove difficult to keep up with a series’ installments if they’re multiformat, and ever-changing technology renders older titles difficult to accept without trepidation. This isn’t to say it shouldn’t be attempted – and I applaud Telltale and BioWare for trying – but rather that narrative-heavy sequels are an increasingly intimidating prospect in an industry that never looks back.

Jeffrey Matulef is a freelance writer based in Portland, OR. His work has appeared at G4TV, Eurogamer, Paste, Gamasutra, Joystiq, GamePro, Mac|Life, and Kill Screen among other places. He can be found on Twitter @mrdurandpierre.