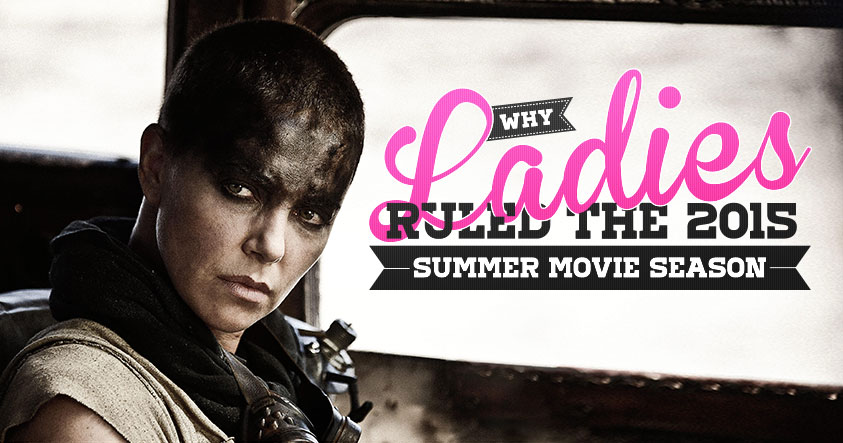 Another summer movie season has come to a close. With 2014’s anemic slate and underwhelming box-office, 2015 had its work cut out for it. Well, I’m happy to report that for the most part, this year’s summer slate delivered the goods with several movies that felt like old school summer popcorn fare.

Led by the 800-pound gorilla (er, dinosaur) Jurassic World, which in itself has grossed $1.5 billion worldwide (a robust $643 domestic), this summer had a great variety of films to offer for kids of all ages. Audiences responded by attending cinemas in droves, alleviating fears from Hollywood-types from top to bottom that movie attendance would continue at a downward trend.

Speaking of trends, there was one in particular that stood out (other than the healthy dose of remakes and reboots out there): the female presence. I’m not talking about the Pitch Perfects, which had its very own blockbuster sequel in May thank you very much, but in films typically geared towards males and fanboys.

These women made us laugh, cry, and, best of all, kicked some major butt. Let’s take a look at how the summer of 2015 will be remembered as the summer when girls “ruled the earth.” (Minor spoilers ahead!)

George Miller’s long-awaited fourth entry in his gonzo Mad Max series delivered in ways very few movies do. Continuing the conceit he started with the first sequel, 1981’s The Road Warrior, Fury Road finds reluctant hero Max Rockatansky (Tom Hardy, replacing Mel Gibson) thrown in a battle not his own. After being captured by Immortan Joe (Hugh Keays-Byrne, who played villain Toe Cutter in the first Max film) and his War Boys, Max inadvertently joins an escape spearheaded by Imperator Furiosa (Charlize Theron), who has smuggled Joe’s five wives away from the prison-like Citadel.

While Hardy is perhaps the only actor who could’ve taken over the role of Max, Miller has performed a nice sleight of hand here as Fury Road strictly belongs to Furiosa. Theron delivers a stunningly ferocious performance, probably her best since her Oscar-winning turn in Monster, but the film goes deeper through the introduction of Joe’s wives, a mixture of the tough and sensitive and played by Zoe Kravitz, Rose Huntington-Whiteley, Riley Keough, Abbey Lee, and Courtney Eaton, and yet even further when they join with a woman tribe called the Vivulani. It is these women that infuse a great abundance of emotion amidst the stunts and spectacle, topped by an resonate moment between Max and Furiosa in the film’s climax. 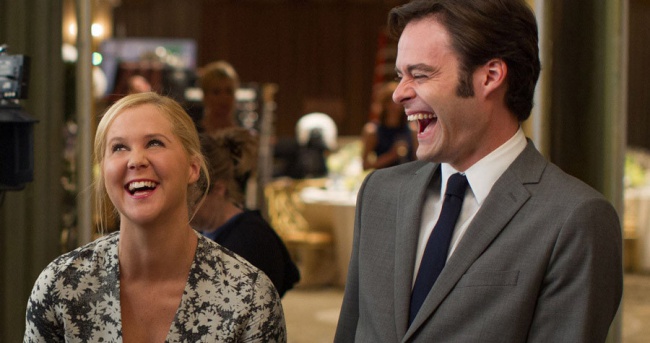 Judd Apatow came to prominence making films about men who never grew up, films like The 40-Year-Old Virgin and Knocked Up . With Trainwreck , he has collaborated with an unlikely muse in comic Amy Schumer, who wrote the script and headlines the kind of romantic comedy that usually has a male in the lead. Schumer plays the titular character, a magazine writer who drinks too much, parties too much, and sleeps around way too much. When she meets a kindly sports doctor (Bill Hader) who also happens to be her latest interview subject, she is shocked to find herself actually growing feelings for him. Like Apatow’s earlier films, Trainwreck isn’t afraid to shock and awe its audience into giggle fits. Featuring the typical Meg Ryan-Julia Roberts-Kate Hudson romantic comedy tropes (everything from the “meet cute” to the “big argument” to the “shameless, climactic winning-the-boy-back ploy” is represented here), what makes Trainwreck truly special is the way Schumer fearlessly goes to some deep and dark places (a subplot involving her father and sister is rooted in reality), never fearing what “going all the way” will bring. 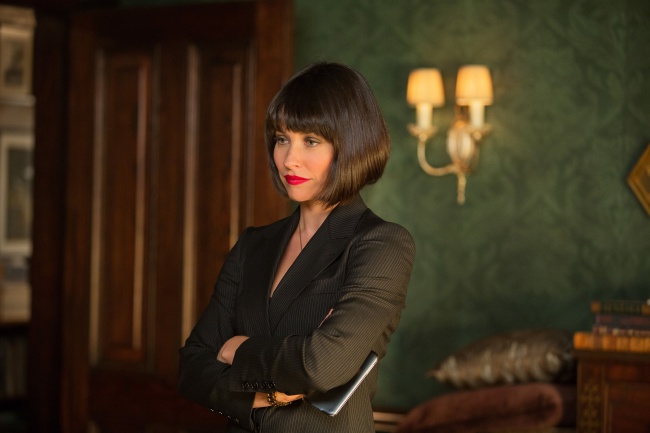 Yes, Avengers: Age of Ultron had the returning Black Widow and a new character, Scarlet Witch, but I preferred the more grounded (at least in Marvel terms) Ant-Man as the superhero movie of the summer. While Paul Rudd comfortably slips in the shoes of the title character (actually, he’s Ant-Man #2) Evangeline Lilly, late of Lost , makes a strong impression as Hope Van Dyne, estranged daughter of physicist Hank Pym (that’s Ant-Man #1), played by Michael Douglas. Director Peyton Reed stepped in after original director Edgar Wright abruptly left and he not only delivered a fast and funny origin tale (if Guardians of the Galaxy was Marvel’s space opera, this one is clearly its comedy), but one that includes a nicely played subplot involving two sets of fractured fathers and daughters: Rudd’s Scott Lang and his little girl Cassie (Abby Ryder Fortson) and Pym and Hope, still blaming him for the death of her mother Jane, who was also the costumed Wasp. Lilly more than holds her own, memorably teaching Lang how to punch in one scene, so when the predictable “kissing” scene arrives, it almost feels forced. At least the traditional post-credits sequence hints that her time inside a costume of her own may not be too far behind…

While the Mission: Impossible films have never skimped on their female characters, whether they be femme fatales or secret agents, there has never been one quite like Ilsa Faust (Rebecca Ferguson) from the Christopher McQuarrie-helmed fifth entry. Playing a double agent who may actually be a triple agent, Faust is a most interesting pawn in a deadly chess match pitting IMF’s Ethan Hunt (Tom Cruise) against the Syndicate, an anti-IMF organization bent on death and destruction, and its twisted leader, Solomon Lane (Sean Harris, looking like an evil Dr. Seuss character). Much has been made about Cruise’s insistence in doing his own stunts (and Rogue Nation opens with a doozy), but the Swedish Ferguson, one of the few memorable things in Brett Ratner’s Hercules , manages to outshine her leading man nevertheless in a star-making turn that has shades of the vulnerable complexity present in Ingrid Bergman’s painfully torn character from Alfred Hitchcock’s Notorious .

5. ALICIA VIKANDER AND ELIZABETH DEBICKI IN THE MAN FROM U.N.C.L.E.

As a late entry in the summer movie derby, Guy Ritchie’s adaptation of the 1960’s spy TV show proved to be light, breezy fun and the perfect way to wind down the season. It’s also Ritchie’s best film since 2000’s Snatch. Henry Cavill and Armie Hammer have a grand time as Napoleon Solo and Ilya Kuryakin, American and Russian spies during the Cold War, respectively, who are forced to team up in order to thwart a plan to get a nuclear bomb in the hands of Nazi-sympathizers. Cavill and Hammer are dapper and commanding in their roles but they are nearly outshone by the two female leads. Alicia Vikander, fresh off her stunning turn in Ex Machina , here continues her screen dominance as Gabby, freshly smuggled out of the Eastern bloc in order to make contact with her uncle, one of the masterminds behind the development of the bomb being produced for the sheer pleasure of the vampy and sociopathic Victoria Vinciguerra (Elizabeth Debicki). Both woman not only provide a handful to our leading men but manage to keep the audience on their toes as well with their beauty and charm. Special mention must be made to costumer Joanna Johnston (Lincoln, Who Framed Roger Rabbit ) for dressing the men and (especially) women in glorious 60s chic period garb. The costumes, in fact, almost become their very own characters.