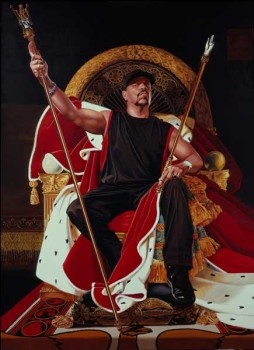 Rapper and actor Tracy Morrow, better known to the world as Ice-T, has let it slip that he’ll be making an appearance in the upcoming Gears of War 3.

During an episode of the Jace Hall Show last year, Ice-T told Gears of War designer Cliff Bleszinski in a phone call that he’d love to appear in Gears of War 3. “It’d be a little more star power, you know what I’m saying,” he told Bleszinski. “Put Ice-T on the box, that’s a million sales right there.” And now it sounds like his wish may come true, because in a recent Ustream broadcast, the Cop Killa revealed, one must presume accidentally, that he’ll have a role in the upcoming game.

He immediately followed with “I didn’t say that,” but all the denial in the world doesn’t mean much after a statement like that, especially when Ice-T is a known gaming enthusiast. There’s also that whole Gears of War 3 conversation with CliffyB that was mentioned earlier, and it’s not as though celebrity appearances in videogames is new and uncharted territory.

In fact, while some celebrity voice work is a complete waste (did we really need Lou Gossett Jr. as the voice of the Vortigaunts?) I’d say Ice-T is a pretty good choice for Gears 3. His penchant for shooting things is well known and his unique way with words would probably suit the game too. True or not, I’ve certainly heard worse ideas.

Zynga Plants FarmVille on the iPhone