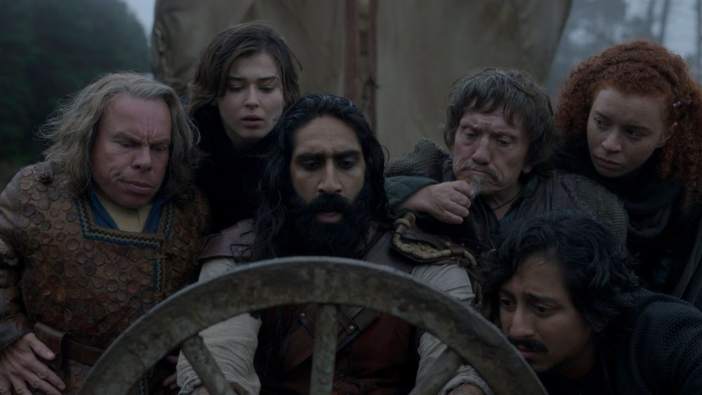 This discussion and review contains some spoilers for Willow episode 4, “The Whispers of Nockmaar,” on Disney+.

While “The Gales” established Willow as a love letter to old-fashioned fantasy, the show is engaged in an interesting conversation with the tropes and conventions of the genre. It is too much to describe Willow as a deconstruction of the classic template, but showrunner Jonathan Kasdan and his writing staff are clearly playing with the underlying logic of the archetypal fantasy narrative.

“The Whispers of Nockmaar” is fixated on the idea of blood, both literal and figurative. The bulk of the episode is driven by the wound that Prince Graydon (Tony Revolori) received at the climax of “The Battle of the Slaughtered Lamb.” He was stabbed, and the wound looks to have become infected. His blood is contaminated. A Lich threatens to take control. According to Willow (Warwick Davis), the only chance of curing Graydon comes from having “his fluids drained” — “blood, pus, (and) discharge.”

As a storm wages outside, the party seeks shelter in the only space available to them: Nockmaar. Willow is uncomfortable with this, warning the party that the fortress was once the stronghold of the evil sorceress Bavmorda (Jean Marsh), whom he summarizes as “the most brutal tyrant of her age.” Of course, she has a more personal connection to the narrative. Boorman (Amar Chadha-Patel) nods towards Princess Kit (Ruby Cruz), “Or as Kit calls her, ‘grandma.’”

It makes sense that Willow should be so preoccupied with the idea of blood and lineage. This is a common fantasy trope. Fantasy worlds are often fascinated by royalty, with titles passed down from one generation to the next through a pure bloodline. They are also fascinated by the idea of race and species, from trolls to goblins — another tie through blood. Indeed, many of these stories are built around the archetype of the “Chosen One,” often across generations and down bloodlines. 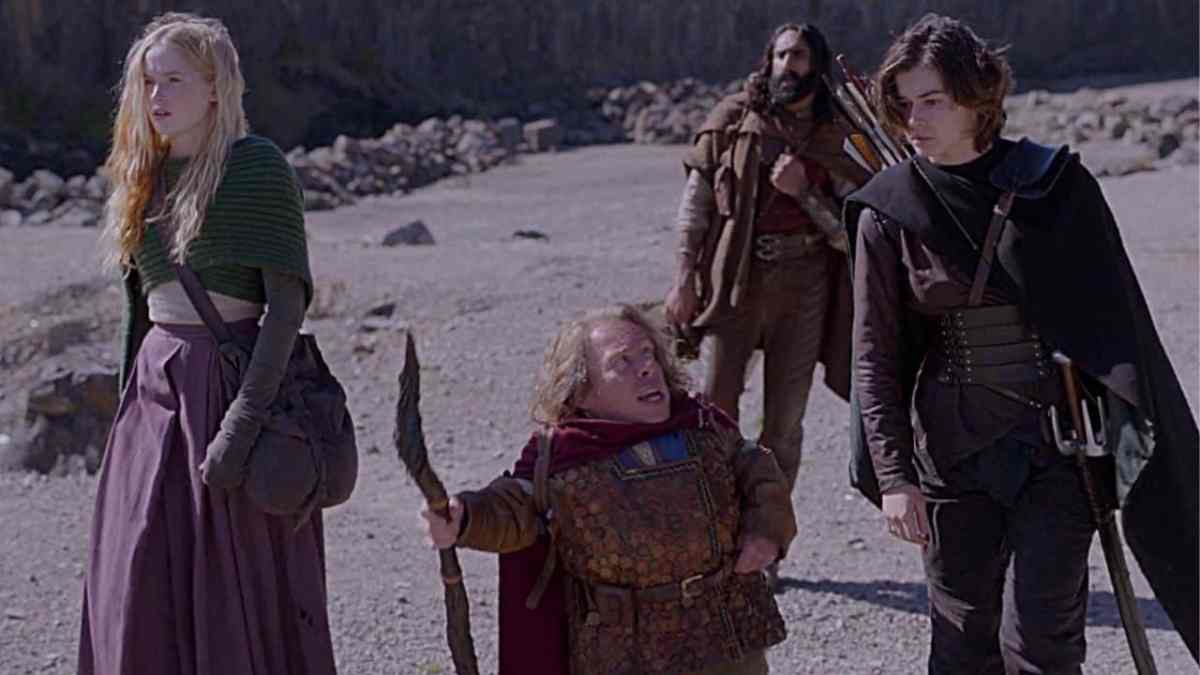 On this, Willow closely aligns with another iconic Lucasfilm property. The central nine films of the Star Wars franchise are known as “the Skywalker Saga,” focusing on three generations of the same family. This focus on bloodlines within these films often obscured or undermined the themes of the larger saga. In Return of the Jedi, Luke Skywalker (Mark Hamill) risks the fate of the galaxy to prove that his father, Darth Vader (David Prowse, James Earl Jones), is still a good man underneath it all.

While this fetishization of blood purity has long been an important trope within fantasy literature, it has a complicated and uncomfortable history. It was one of the tropes that Norman Spinrad was deconstructing in The Iron Dream, a novel that reimagined Adolf Hitler as a Hugo-winning fantasy novelist. As Niels Werber points out, there is something inherently unsettling about story logic where “races are hereditarily good and wise like the Elves or genetically evil and dumb like Orcs.”

Modern fantasy has found itself grappling with the implications of this fixation on blood-as-destiny. Dungeons & Dragons recently revised its characterization of orcs and dark-skinned elves as inherently evil. Director J.J. Abrams has explained that the retcon in The Rise of Skywalker that Rey was really the granddaughter of villainous Emperor Palpatine (Ian McDiarmid) was intended to demonstrate that “there are things more powerful than blood.”

In some ways, Willow feels like a much more thorough and competent exploration of what Abrams attempted to do with The Rise of Skywalker. Notably, when Willow engages with the familiar fantasy tropes of lineage and bloodline, it seems more horrified than enchanted. Kit isn’t empowered by her biological ties to Bavmorda, but haunted. As she enters Nockmaar, she recalls her mother’s (Joanne Whalley) warning, “Bavmorda’s blood, her spirit, survived. In me, in your brother, in you.” 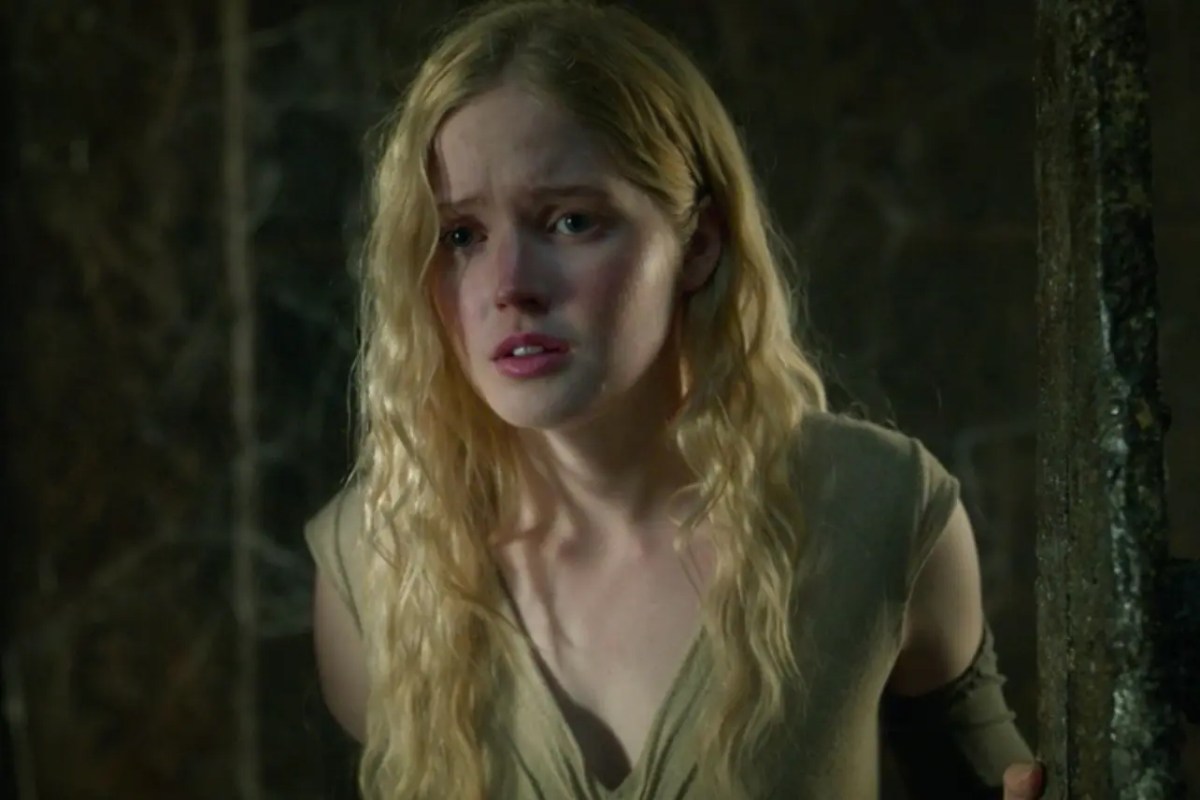 It’s possible to read Willow as a story of familial dissolution, and “The Whispers of Nockmaar” plays into that. After all, Kit’s trip to Nockmaar is a dark inversion of a classic homecoming narrative. This is a place that belongs to Kit and her family, but it is not comforting. The past is alive and memories are conjured into being, but most of those memories are nightmarish encounters with family, with Dove (Ellie Bamber) even witnessing the death of her anonymous mother (Sallyanne Law).

From the opening shots of “The Whispers of Nockmaar,” it is made clear that Kit and her companions still live in a world defined by the atrocities of Bavmorda. Rather than opening through a transition in the classical storybook, “The Whispers of Nockmaar” begins by zooming in on “the Malatrium,” a cursed text “bound in the skin of a satyr.” This is one of Bavmorda’s most cursed artifacts, written in an alien language. It’s interesting that our heroes are tied by blood to such atrocity and violence.

Whenever blood lineage comes up in “The Whispers of Nockmaar,” it is framed in deliberately uncomfortable terms. Bavmorda can trace her power back to the “Blood of the Six.” Willow explains that this is an unbroken line that stretches across history. “In the beginning, in the Grove, six fayes betrayed the Mothers to serve the dark power. That line continued through the ages. Strong magic, but corrupt.” The idea of blood purity is not something to be desired; it is something to be rejected.

Tellingly, Kit spends a lot of “The Whispers of Nockmaar” weighing the possibility that she might have to murder Graydon to protect the expedition. If Willow cannot cure the infection, if he cannot complete the ritual of “casting out,” then execution is the only option. Boorman wryly notes that perhaps Kit has more in common with Bavmorda than she might concede. “I just think Bavmorda would be very proud of her granddaughter right now,” he muses. 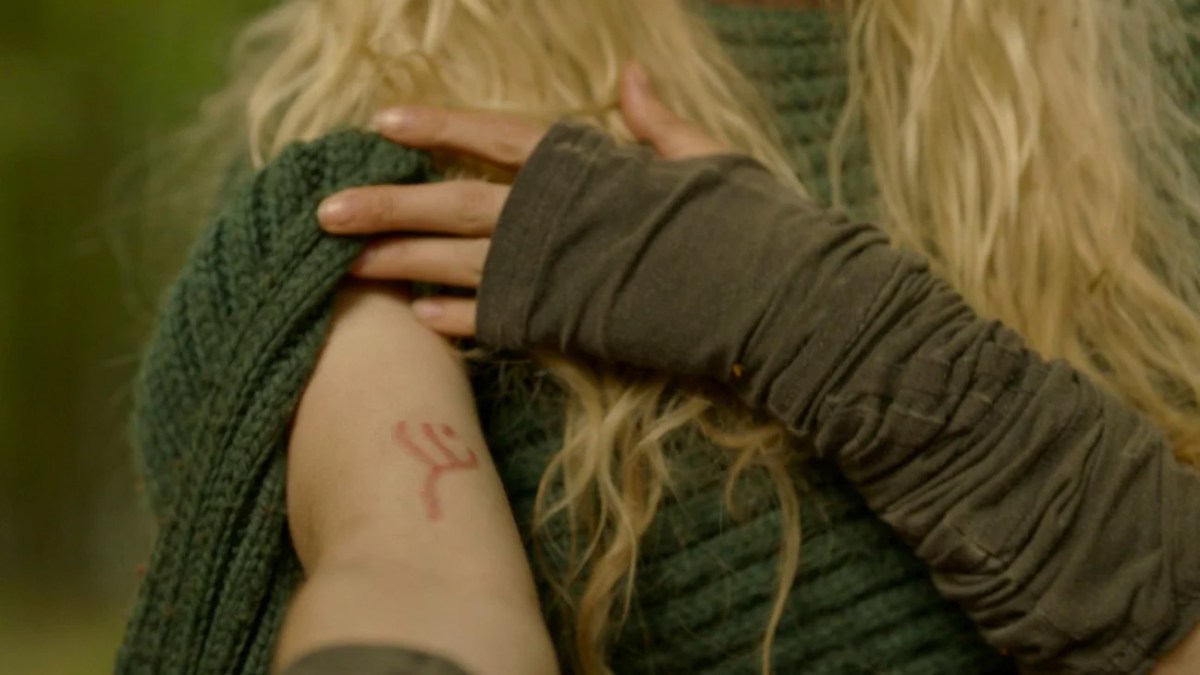 “The Whispers of Nockmaar” offers some background on Graydon, in a way that reinforces this subtext. Graydon’s royal lineage is no less unsettling than that of his fiancée. It is revealed via flashback that Graydon murdered his elder brother (also Revolori), a sin almost as primal as the one suggested by the betrayal in “the Grove.” Again, blood and lineage are presented as something monstrous, as his father (Derek Horsham) urges him to “give Galladoorn an heir with a claim to Tir Asleen.”

It is tempting to overstate this, but it is intriguing that blood and family are repeatedly framed as sources of horror within “The Whispers of Nockmaar.” Kit’s blood ties her to a haunted castle with a ghastly history. More mundanely, Graydon’s bloodline is just a way for Galladoorn to assert control of Tir Asleen. It’s telling that the healthiest parent-child relationship in “The Whispers of Nockmaar” is Dove’s vision of her mother. That woman, pulled from archive footage of the original film, is never even named. She is lost to history.

It is fitting, then, that “The Whispers of Nockmaar” is built around a ritual that Boorman summarizes as “an exorcism” in this old and haunted family home. The goal is to literally cast out the Lich that has taken root within Graydon. However, it also serves as a more metaphorical expulsion. In its own way, it is a classical and archetypal story beat, with the central characters confronting the ghosts of their past before pressing ahead into the future. The party leaves Nockmaar under much brighter skies.

Then again, it might not be so simple. The closing scene of “The Whispers of Nockmaar” cuts from the party marching away from the ruins of Nockmaar to Prince Airk (Dempsey Bryk) waking up in a strange and decayed land. While the design aesthetic is different, it suggests a parallel in Airk and Kit’s journeys. Given Willow’s monologue about how “the Order of the Wyrm” abducted Bavmorda to corrupt her “with their warped beliefs,” Airk might have to confront his grandmother’s legacy in his own way.

It is too much to describe Willow as a deconstruction or interrogation of the tropes of classical fantasy narratives, but “The Whispers of Nockmaar” demonstrates that the show is engaged with the conventions and logic of such stories. Those tropes are in the show’s blood, just as sure as Bavmorda is in Kit’s.