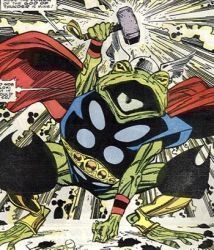 The MTV Multiplayer blog has posted an early preview of the upcoming World of Warcraft comic, as well as an interview with writer and acclaimed industry figure Walt Simonson.

Writing the comic turned out be hard work, according to Simonson, whose research included reading all the novels and manga comics, spending time on websites such as WoWWiki and being in touch with Blizzard directly. Family and friends who are World of Warcraft players have also helped. “I have a friend nearby who is a Warcraft player,” Simonson said. “He has played the game almost from the conception, and he seems pretty cool with what we’re doing so far.”

The story follows an amnesiac human enslaved by an orc Shaman, who struggles to recall his past while interacting with both the human and orc factions in the world. As well as telling his own unique story, the comic will also reveal some secrets from the game. “If you’re a longtime player, I think the comic is a revelation about some of the mysteries,” he said. “There are mysteries from the past that have never been totally addressed within the game, or at least we’re able to address them in the comic in a way that the game hasn’t been able to.”

The full interview, as well as scans of the first five pages of the first issue, is available here. The World of Warcraft comic book, published by Wildstorm, will be on the shelves in November.