I played the demo for Resident Evil 5 a couple of months ago. I felt like whoever put the thing together was trying to talk me out of getting the game. I know Resident Evil has always been notoriously impoverished in the story department, but for the demo even that barely-perceptible vestige at narrative had been stripped away, along with all of the other things that might have made the experience compelling. There was no building of tension, no explanation of the world or the characters, their purpose, or even the situation at hand. No puzzles, no meaningful dialog, no in-game teaching of basic concepts before the fighting starts. The demo simply drops you into zombietown and makes you fight zombies until an invisible timer runs out and you win. At the end there was no hook, no situation where you can’t wait to see what happens next, because you’re never given any clue as to what’s happening to begin with.

The only thing “demonstrated” in the demo is the raw combat mechanics, which I don’t think is the selling point here. I doubt there are many players just dying to seize control of a musclebound turret-man who handles like a forklift in a phone booth. All told, the demo offered only a few minutes of gameplay. There was no real story, no sense of tension, no investment in the characters and their plight. It was just an arena in which to shoot stuff that was bad and not shoot stuff that was good. Nice try Capcom, but Robotron accomplished that much way back in 1982.

Because complaining about bad entertainment is my favorite form of entertainment, I mentioned this on my blog. The Capcom faithful came to the defense of their title. “The demo was just for series veterans, not newcomers,” they said. “It was just a gameplay demo, not a story demo.”

I don’t think that’s much of a defense. Either this demo was intended for potential customers and failed utterly to offer them a compelling reason to take interest in the series, or the demo was aimed at fans who were already going to buy the game. Either way: What’s the point? Isn’t the ultimate goal of marketing to get people to buy stuff? How does wasting everyone’s time move us any closer to that lofty goal?

“Don’t be stupid. Everyone knows the story of Resident Evil. You shoot zombies. You’re just looking for something to complain about.”

I’d buy that argument if this wasn’t part of an overarching trend. I spent a weekend going through a lot of Xbox 360 demos and was amazed at how many of them were just a few minutes of chaotic action that made no effort to engage the player or make them want more. There were games I’d never heard about that just began with the assumption that I was already familiar with the series.

The demo for Dead Space was the same as the Resident Evil 5 demo. No explanation for who you are, where you are, what’s going on, or what your goals are beyond “go over there and press a button.” You start in a hallway, read some tooltips, and then open a door and start blasting away like you’re playing 1992’s Wolfenstein 3D. Plot? Characters? Pacing? Suspense? Why would a survival horror game need any of that? 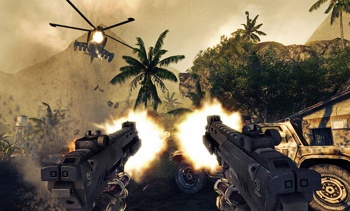 The trend of the pathetic demo has been going on for a while now. Over the last few years, demos have become shorter to the point of being nearly momentary. I understand there’s not much that can be done about that. Games need a lot of data, and there’s only so much you can reasonably expect people to want to download. There are costs associated with serving up that much data, and it’s no longer feasible for a demo to give us a third or a fourth of the total game like in days of yore. I understand this. My gripe is that the small morsel of the game we’re getting isn’t representative of the whole. Pizza Hut doesn’t give out free samples of their pizza that are simply flecks of pepperoni on a stale saltine. I don’t expect a full-length, full-featured game when I get a demo, but I do expect to get something that roughly represents the final product. And selfishly, I still expect to be entertained for my trouble.

This might seem petty. I mean, demos are free, right? Why complain? But I dislike this trend because it’s a waste of developer resources that could be used to make a game better. The developer spends money making a demo which is nothing like the real game, and is worse in tangible ways. The player spends time downloading and playing it, decides it’s not fun, and doesn’t buy the full version because they don’t realize just how much was stripped out of the demo. Everyone loses.

You need pacing if you want to immerse someone in a game. If you look at the first few minutes of a videogame, they usually offer a very carefully constructed introduction. The player meets some of the main characters. The threat is introduced. The player is taught how to (say) open doors, or pick up items. They’re given a small, easily conquered threat to make sure they have a handle on the controls. Then the game begins gradually ramping up the threat level and difficulty as the player is pulled in. But you can’t skip those early steps, drop someone into the game a half hour in, and expect to achieve that same level of excitement. The movie Alien was scary. But you couldn’t make a one-minute highlight reel of random screaming and claws and teeth and expect the viewer to reach that same level of fright. Those sixty seconds needed the other 116 minutes to support them.

Demos are not all bad, but I don’t think this trend of plotless combat demos is good for sales. I think we’d be better off with demos that perhaps showed less but took the time to draw the player in.

Amazingly, the longest and most entertaining demo I’ve played recently is the one I expected would be shamefully bad. The Crysis demo did a good job of showing off the gameplay, character, story, different combat situations, vehicles, and (duh) the visuals. It lasted about an hour, (which is epic by modern standards) and ended right at a major plot twist. I’ve been sneering at Crysis for months, but now I actually have a favorable opinion of the game. Yes, the plot is a cliche boilerplate tenth-generation mimeograph of space marines vs. the monsters, but at least it has a plot, which is more than I can say of most of the other demos I’ve tried.

Question: What’s the last demo you played that really made you want to run out and buy the game?

Shamus Young is the author of Twenty Sided and the vandal behind Stolen Pixels. He might also play the odd videogame now and again.